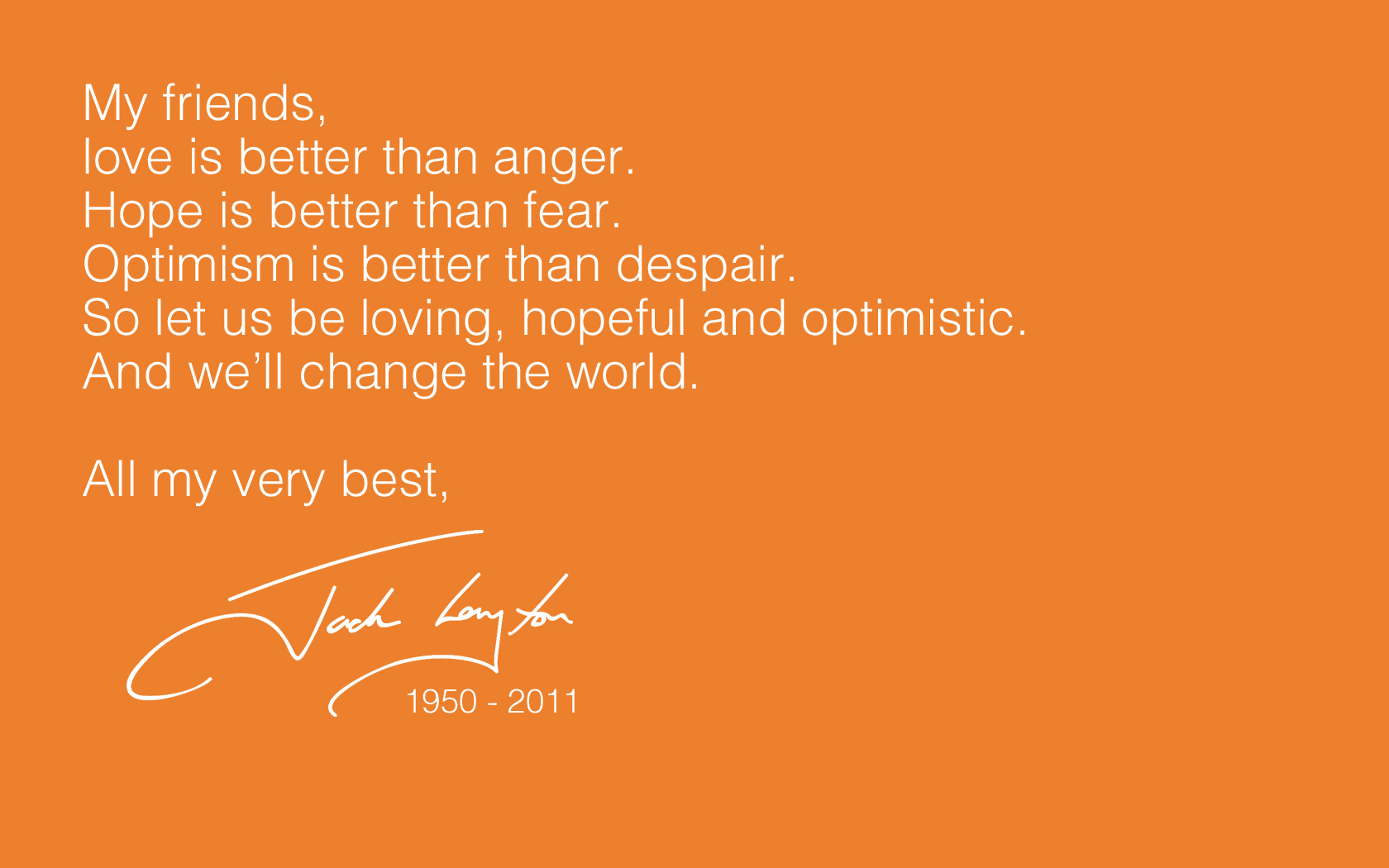 Jack Layton was the second politician to make an impact on me and my political views.

The first was Barack Obama.

I met Jack Layton at a campaign rally here in Winnipeg during the election of 2011. He was shorter than I'd expected but his charismatic energy filled the room so much that it didn't matter. I still caught myself catching my breath.

He talked about ideas that make sense, like inclusivity, combatting climate change, and true universal health care, and that were grounded in an unwavering belief that by working together we could achieve much more than we ever could by competing against one another.

The room was filled with young people and people of colour and it felt good to be among hundreds of others who believed, like Jack, and like me, that we all become better together.

During his speech Jack talked about being a Canadian Idealist. I didn't know what that was, so I looked it up later, and this is what I know:

Canadian Idealism is a philosophical belief founded on three principles:

1. The Enlightenment (capitalism) has suppressed culture in our society.

Culture is how we make sense of our values and beliefs as a society. We need to invest in preserving and promoting our culture because it's how our knowledge and historically inherited ideas are passed down through generations.

2. Philosophy must include a study of history.

We need to thoroughly understand and study history and see where we went wrong in order to keep from making the same mistakes. This is the only way to build towards a society that can balance the civic unity (aka, the common good) with individual freedom.

3. We achieve freedom through the ethical life of our community, not in spite of it.

By participating actively in our society, and by putting social systems in place where people feel empowered to thrive and pursue their goals, we can build a society that is truly free (aka, positive liberty).

Turns out, I'm a Canadian Idealist. Who knew.

At the end of his speech Jack stuck around to shake hands and take photos, and I snaked my way through the crowd and ohmygod somehow wound up right in front of him. I felt overwhelmed and slightly sick, like meeting your idol for the first time. I blurted out something dumb like:

"I really admire what you're doing and I believe in you."

"I believe in YOU. We're in this together, and we couldn't do this without you."

I get misty thinking about how empowered he made me feel in that moment, and clearly it made an impact on others, too:

That election cycle, thanks to his leadership, the New Democratic Party more than doubled their seats in the House of Commons, and the NDP became the Official Opposition party for the first time ever.

Everything felt hopeful. Sure, we hadn't quite given the Conservatives the boot (yet), but the Orange Crush had come and the tides appeared to be turning. Canada, finally, started to look like it may become the kind of country that 30.63% of Canadians just like me wanted to see.

Then, too suddenly, Jack Layton announced that he'd been diagnosed with pancreatic cancer, and on August 22, 2011, he died.

He was a beacon for the kind of person we should strive to be, and is someone I try to model myself after when it comes to how I live my life and advocate for the things I believe in.

You could tell that he was one of those rare people who got into politics because he believed passionately in the need for positive change. Not just through the policies he pushed for, but because he lived and breathed his beliefs in everything he championed, and everything he did.

He founded The White Ribbon Campaign, a movement of men and boys working to end male violence against women and girls.

He was one of the early advocates in the fight against AIDS.

He installed solar panels and geothermal heating and cooling in his house.

He rode his bike everywhere.

Even in his death, he managed to inspire so many of us with his last words.

As he lay dying, all that he could think to do, after spending his whole life in the service of others, was to leave us with a message of hope, forgiveness, and unity.

I'm going to copy/paste it from the CBC website below because you should read it. We all should. We live in scary, divisive, and uncertain times and it's important to be reminded of the good that resides in all of us.

So let's pour one out for one of the kindest and most compassionate Canadians of all time, our good friend The Honourable Jack Layton, PC MSC

Canada could really use you right now.

Tens of thousands of Canadians have written to me in recent weeks to wish me well. I want to thank each and every one of you for your thoughtful, inspiring and often beautiful notes, cards and gifts. Your spirit and love have lit up my home, my spirit, and my determination.

Unfortunately my treatment has not worked out as I hoped. So I am giving this letter to my partner Olivia to share with you in the circumstance in which I cannot continue.

I recommend that Hull-Aylmer MP Nycole Turmel continue her work as our interim leader until a permanent successor is elected.

I recommend the party hold a leadership vote as early as possible in the New Year, on approximately the same timelines as in 2003, so that our new leader has ample time to reconsolidate our team, renew our party and our program, and move forward towards the next election.

To other Canadians who are on journeys to defeat cancer and to live their lives, I say this: please don’t be discouraged that my own journey hasn’t gone as well as I had hoped. You must not lose your own hope. Treatments and therapies have never been better in the face of this disease. You have every reason to be optimistic, determined, and focused on the future. My only other advice is to cherish every moment with those you love at every stage of your journey, as I have done this summer.

To the members of my party: we’ve done remarkable things together in the past eight years. It has been a privilege to lead the New Democratic Party and I am most grateful for your confidence, your support, and the endless hours of volunteer commitment you have devoted to our cause. There will be those who will try to persuade you to give up our cause. But that cause is much bigger than any one leader. Answer them by recommitting with energy and determination to our work. Remember our proud history of social justice, universal health care, public pensions and making sure no one is left behind. Let’s continue to move forward. Let’s demonstrate in everything we do in the four years before us that we are ready to serve our beloved Canada as its next government.

To the members of our parliamentary caucus: I have been privileged to work with each and every one of you. Our caucus meetings were always the highlight of my week. It has been my role to ask a great deal from you. And now I am going to do so again. Canadians will be closely watching you in the months to come. Colleagues, I know you will make the tens of thousands of members of our party proud of you by demonstrating the same seamless teamwork and solidarity that has earned us the confidence of millions of Canadians in the recent election.

To my fellow Quebecers: On May 2nd, you made an historic decision. You decided that the way to replace Canada’s Conservative federal government with something better was by working together in partnership with progressive-minded Canadians across the country. You made the right decision then; it is still the right decision today; and it will be the right decision right through to the next election, when we will succeed, together. You have elected a superb team of New Democrats to Parliament. They are going to be doing remarkable things in the years to come to make this country better for us all.

To young Canadians: All my life I have worked to make things better. Hope and optimism have defined my political career, and I continue to be hopeful and optimistic about Canada. Young people have been a great source of inspiration for me. I have met and talked with so many of you about your dreams, your frustrations, and your ideas for change. More and more, you are engaging in politics because you want to change things for the better. Many of you have placed your trust in our party. As my time in political life draws to a close I want to share with you my belief in your power to change this country and this world. There are great challenges before you, from the overwhelming nature of climate change to the unfairness of an economy that excludes so many from our collective wealth, and the changes necessary to build a more inclusive and generous Canada. I believe in you. Your energy, your vision, your passion for justice are exactly what this country needs today. You need to be at the heart of our economy, our political life, and our plans for the present and the future.

And finally, to all Canadians: Canada is a great country, one of the hopes of the world. We can be a better one – a country of greater equality, justice, and opportunity. We can build a prosperous economy and a society that shares its benefits more fairly. We can look after our seniors. We can offer better futures for our children. We can do our part to save the world’s environment. We can restore our good name in the world. We can do all of these things because we finally have a party system at the national level where there are real choices; where your vote matters; where working for change can actually bring about change. In the months and years to come, New Democrats will put a compelling new alternative to you. My colleagues in our party are an impressive, committed team. Give them a careful hearing; consider the alternatives; and consider that we can be a better, fairer, more equal country by working together. Don’t let them tell you it can’t be done.

All my very best,