The Power of the Hashtag

In the last few years the use of the "hashtag" (the # symbol - previously called the 'Pound Sign' if you're a fossil like me and used a push-tone phone growing up) has exploded in popularity. Unless you live under a rock you've likely been bombarded with the hashtag symbol everywhere - on commercials, billboards, on social media, on clothes... these days the "hashtag" is one of the most pervasive and powerful symbols of our digital age.

Despite seeing hashtags everywhere, most people don't understand their importance or how to harness their power to help them convey their message across social media platforms. A simple hashtag can improve your reach, drive brand recognition, and easily engage in large-scale conversations online.

If you're a business owner or someone hoping to expand their social media influence, a hashtag should be an important part of your social media strategy. This is because a fitting hashtag can help drive brand recognition, drive customer loyalty, and help spread the word about your idea or product.

What this means is that you can include a simple hashtag in your social media post and immediately have it seen by anyone else looking for that hashtag. Here's an example using Twitter:

Above is a tweet that I just created which includes the #SocialMedia hashtag. When I tweet something that includes a hashtag, the hashtag works like a link which allows people to click on it and find other tweets relating to the same subject.

When I click through on the # link Twitter takes me to a page filled with other tweets which include a "#SocialMedia" tag. The "live" feed (people using it in real-time) looks like this: 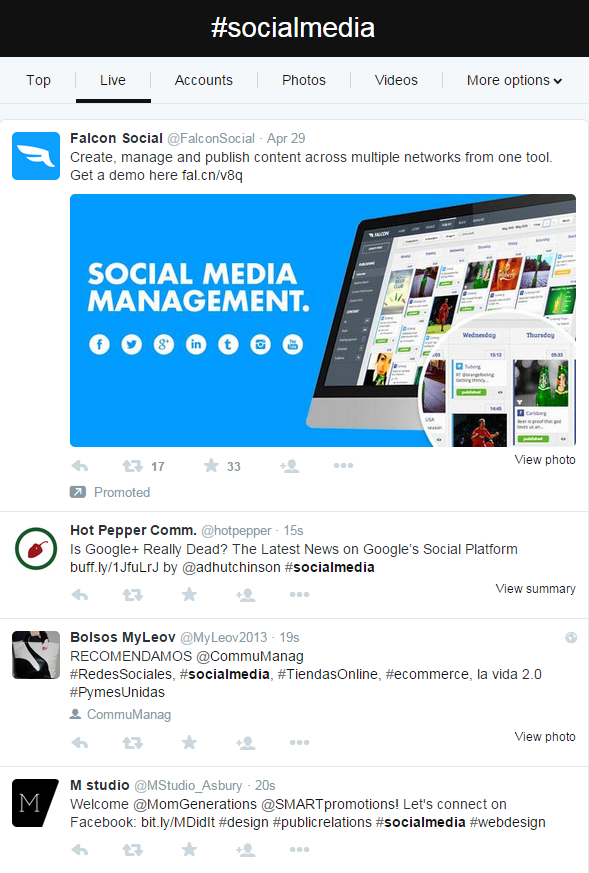 As we can see, my #SocialMedia hashtag allows me to connect with other people who are tweeting about the same subject, and for others to find my tweet as well. Twitter also offers search options to refine what you want to see from that topic.

Hashtags first started to become commonplace on Twitter as a way to link ideas and conversations in the way that I just described, but other social platforms like Facebook and Instagram have also adopted using them as well.

Even if you know why a hashtag is important, it isn't going to do you much good if you don't know how to use it effectively. In fact, when misused you can actually drive people away from your message because too many hashtags feels spammy (more on that in a second.)

Here's are some ground rules for making sure you're using hashtags to their full usefulness:

(via Google. I have no idea who this poor soul is)

Don't over-tag a single post. Twitter's best practices recommend no more than two per tweet, and in addition to being visually unappealing it also dilutes your message. Using too many hashtags dilutes the meaning of your message because you're trying to appeal to too many ideas at once.

An exception to this rule is Instagram, in which photos with at least eleven (yeah, 11!) hashtags get the most interaction. This is because Instagram doesn't have a character limit for captions on their photos, and because hashtags are the easiest way for its communities to connect with one another

The trick do doing this effectively, however, isn't to include a million hashtags in your original photo post, but rather to include a comment with your wall of hashtags afterward. This ensures that if you're sharing your photo on other social platforms the people seeing it there aren't bombarded with a dozen messy-looking hashtags. That way you're still able to connect with your Insta-communities, but are also saving some face on any other social networks your photos might be sharing to.

What can you do?

Pick a specific hashtag. If you want to start using hashtags to raise awareness for your product, brand or project, pick a specific hashtag and use it exclusively, or with one other hashtag in the body of your post. Make it unique, relevant to what you're talking about and easy to remember.

Start a Twitter Chat. If you're active on Twitter, another great option is to start Twitter chats using a hashtag specific to the theme you want to discuss. These chats operate like live Q&A's on Twitter which are organized around a specific hashtag. For instance, I participate in a Twitter conversation with other Canadian bloggers every week called #blogchatca - the hashtag is easy to include and remember, and allows me to find other people participating in the conversation and respond to them. By including the hashtag #blogchatca I know we're all participating in the same conversation.

Pick something obvious. Make sure that your hashtag is short, easy to remember, and (if possible) unique to whatever you're discussing. For example, this past weekend I participated in a game jam where the official hashtag was #GameJam. This is great because it's easy to remember and find, but it's a pretty widely-used hashtag because many game jams happen at the same time. As a result, many people tweeting about the game jam I attended started using #PegJam to indicate that they were at a game jam in (you guessed it) Winnipeg. This way everyone could find each other easily and see what others were sharing and discussing.

Do you have any tips on hashtag use? Anything you'd avoid doing? I'd love to hear your thoughts!