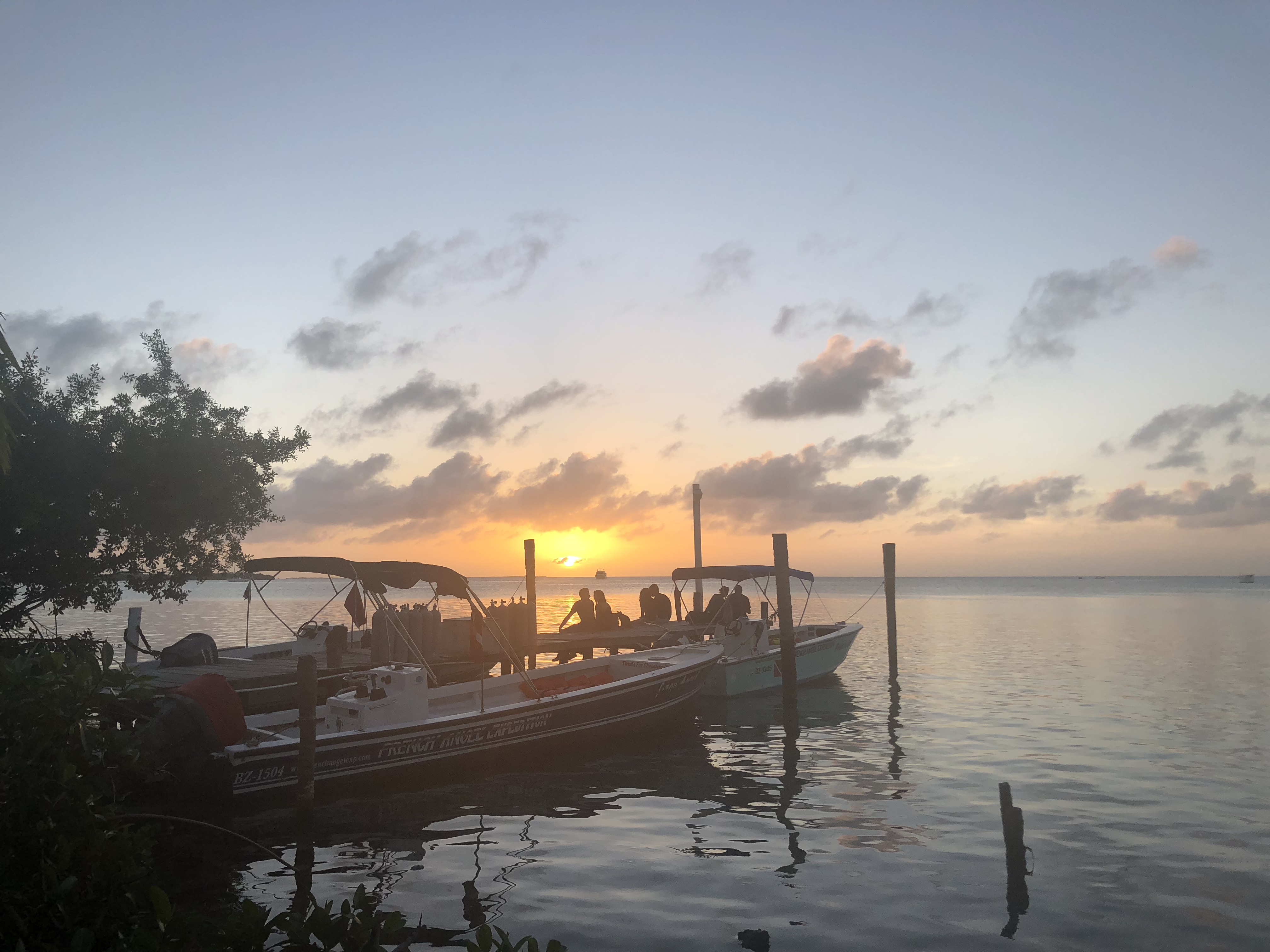 For most of our stay we rented an AirBnB in a place called The Bahia which is a thirty minute walk or so from the village of Caye Caulker.

When we arrived on the island it was after dark and the golf cart taxi that we caught at the water ferry dock almost got lost because he took the long way around, which didn't have street lights or signs.

As we pulled up to the big yard the security lights came on and three friendly dogs came running up to us. These dogs would become good friends in the coming weeks, despite one of them chewing up one of John's shoes when I moved them outside to sweep.

Our AirBnB host was waiting to walk us through our space: two bedrooms, a kitchen, bathroom, living room, and two-tier deck that we would call home for the next 10 days.

I'm surprised in retrospect how easily we settled into quiet days in our house.

Most mornings the sunlight and heat would wake me up before 7AM and I'd spend quiet mornings on the couch working, or laying in the hammock with a book and petting the dogs while John snoozed.

Waking up and standing on the deck and looking at the ocean while I sipped my coffee filled me with a sense of contentedness that I don't often feel.

It's surprising how at peace one can feel when close to water, or the ocean.

On the first day we biked into town and got breakfast, but in the following days we ate most of our breakfasts at home. John would make eggs and sausage and I cut up fresh tomatoes, papaya, and slices of thick cheese. We ate sitting across from each other, our legs brushing under the table.

The AirBnB came with two cruiser bikes and most days we rode our bikes into the village in the morning and rode them back in the early afternoon after we'd gone swimming, kayaking, or scuba diving.

In the evenings we would shower and walk back on foot to get dinner somewhere, dodging potholes and petting the various dogs that lived in the neighbourhood.

At night we'd walk home or catch a golf cart taxi if it was raining, or if we were too tired. Whenever we came home the dogs would be there to meet us, running up to our bikes or jumping onto the back of the taxi to say "welcome back!" when we arrived.

One night when it was storming we retreated to our little home and listened to music and talked and drank beer as the rain pelted the house. I spotted two geckos on the walls that night.

The following morning I woke up and there was a man breaking up seashells and debris in our yard using a machete. I watched him for a bit from inside and we waved at each other when I stepped outside to set up the hammock. He had two little boys with him, one of which was his son, and I enjoyed watching them chase the dogs around the yard while he worked.

Since The Bahia is still in development - there are several streets that are planned, but not built, and the area is undergoing a surge with new houses and AirBnBs bleeding into the area - it was far enough from the village that most of the people around weren't tourists.

Around 8AM every morning one of our neighbours - I use this term loosely because there were several feet of swampy mangrove roots in-between our houses - would start playing music. Loudly. Usually it was some sort of salsa or Spanish fusion.

Within a few hours one of our other neighbours - this one was further up the street, I think - would start blaring his music (usually Top 40's hip hop) and the two of them would wage a war of attrition against one another all day. Each one slowly turning up his or her music to drown the other out.

I found this exchange to be particularly hilarious coming from our stuffy North American "too polite" standards.

Heaven forbid someone else hears your music!

In the mornings when I would stand on the deck the construction workers across the street would wave at me and shout "good morning!" and I enjoyed watching them get deliveries of sandwiches and Fanta throughout the day.

At night we would walk home and pass people's houses with doors wide open, usually with the TV on or sometimes playing the radio. We experimented with different streets to see which way was the most efficient (and had the fewest potholes), and got to know all the local landmarks which helped us find our way home in the dark, or the rain, or after a few drinks.

Our location allowed us to immerse ourselves in island life in a way that isn't available with a hotel or resort.

There's an ebb and flow to neighbourhoods and cities, and I deeply miss the early mornings, busy days, and quiet nights that we experienced in The Bahia.

One night we were hanging out at the Windsor pizza place and the guy managing the restaurant decided to bike home with us as we walked. We passed by the convenience store with its bright, fluorescent lights cutting through the darkness and he pointed at one of the wooden houses on stilts across the street:

"See that place?" he said "that's my home. I own that place! I moved here from Belize City and now I own my own home on this beautiful island. I'm living the dream."

And I realized: maybe he actually is.