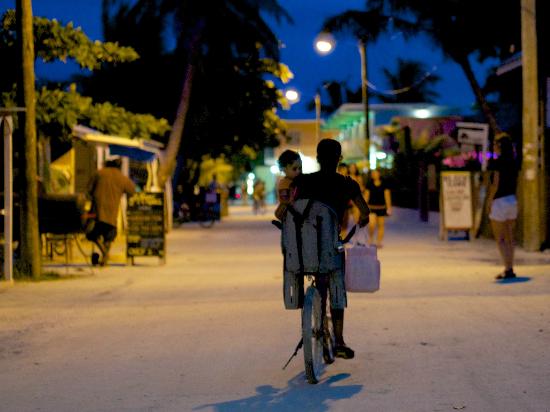 On our second-last night on the island we finally decided to go to Pippy's restaurant.

Pippy (pronounced Pépe) spends his days hanging out in front of one of the Chinese grocery stores with a menu in his hand heckling people to go eat at the restaurant where he works, telling them about the day's specials.

It was getting dark and we'd just finished watching the tarpin over by Tarpin Watch, which is a dock on one end of the island where a bunch of huge tarpin congregate

and I was ready to eat, so when we walked by Pippy and he hollered at us about the conch soup we were like

"fine, okay. Take us to the restaurant."

and we round a corner and find a picnic shelter with a few picnic tables and some rowdy folks enjoying some amazing-smelling food.

They were finishing up but stayed around to chat for a bit. Their names were Jen, Brian, Zane, Nick, and I think we also met another Jen and Shawn that evening, and an older lady named Kale and her husband Ricky Lee, and we all bonded over being from cold places.

Jen and Brian were on the island to get married and invited us to their wedding the next day which of course we agreed to. They went on their way and we stayed at Meldy's (the restaurant's name) to finish eating some of the best damn curry shrimp I've ever had.

Afterward we were treated to a series of rum punch drinks courtesy of a young Belgian couple we ran into while buying beer from the store. Her nipple piercing was infected (!!!) and we helped them buy Hydrogen Peroxide so they made us drinks as a "thank you"

(people are so nice on vacation!)

But after a few of those I was feeling tipsy and needed a snack so we walked up Front St to a street vendor selling the best damn burrito you'll ever eat, and a golf cart pulls up and we hear

and it's Jen and Brian and Nick and Zane on the golf cart and Pippy's on the back and we hop on and go up to the street and party with them all night. Pippy rapped and we did way too many shots and had the blurriest night filled with so many laughs.

The next morning we slept through as much of our hangover as possible and spent the day wandering around the island, soaking up our last day and hunting for lobster to eat.

At 5pm we walked to The Split where the wedding was supposed to start and noticed some local police officers driving up on a golf cart behind us. Over by the bar were all the friends we'd made the night before, as well as some of the locals from the island and some of the expats Jen and Brian had met during their stay.

It felt like a weird, beautiful culmination of many of the faces that had started to feel familiar over the last few weeks. Even Thug Taxi was there!

We grabbed beers and waited for Jen and Brian to arrive and since the weather was getting dark and the wind was picking up Nick decided to get things underway.

I took video and John snapped photos and everyone formed a semi-circle around the couple as Nick officiated. One of the police officers on the island, Lieutenant (or was it Constable?) Terrance played Charlie Pride and George Jones.

Pippy, the unsuspecting catalyst for all of these amazing memories and new friendships was Brian's best man.

with beers in hand and walked up Front St. to a restaurant called Hibiscus where we drank martinis and ate amazing food and laughed until our throats felt raw.

It was a nice reminder that weddings don't have to be a big hoopla.

That they can be about you and a couple of people you love and some random people you invited into your life.

That it can be a chance to make new friends and help other make great memories, too.

Honestly that wedding was the best possible way to end our trip.