Back at the office and real life after three awful days of the flu. Feels good to be eating solids again! Currently inhaling a turkey & cranberry wrap from Diversity Foods. Amazing. 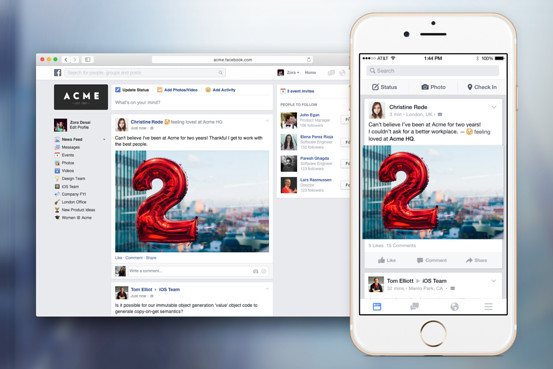 Been reading heaps today about Facebook's new Facebook at Work App but am unsure about how I feel about it. I use Google Drive both personally and professionally and am really happy with it.

Plus Facebook at Work doesn't offer document sharing between profiles or in groups (yet) which is a big dealbreaker for me.

It's smart of Facebook to start really targeting a more professional (read: adult) audience since from everything I've read young people aren't really gravitating to it and using it as their main social platform anymore, but the idea of having separate work/personal Facebook accounts seems a bit cumbersome IMO.

Also, there's already everyone's favourite (sigh) professional network, LinkedIn, and I already consider updating my LinkedIn to be enough of a hassle that yet another profile to manage and toggle between grates at my nerves a bit.

Though Facebook seems to be focusing on chat and Groups and less on showcasing online resumes, LinkedIn is apparently considering integrating a chat feature sometime in the future and is going to be releasing tools to make it easier to connect with co-workers this quarter, so it looks like it might be moving towards a more social experience than just trolling through other people's work histories.

I don't know, while the whole " no ads & no tracking user data" is appealing, it would take a lot for me to move away from Google Drive, Skype and the myriad of other social networks that I already frequent for my professional work.

It doesn't really matter anyway, because it's not available for us plebes at the moment and Facebook is still testing well into the forseable future.

Right now, though? I'm happy keeping my Facebook use the way it is: as a distraction from my work, not as an integral part of it.

How to Create Facebook Ads That Actually Get Results