Earlier today Tony shared this image on his Facebook and asked: "am I really part of the problem?" 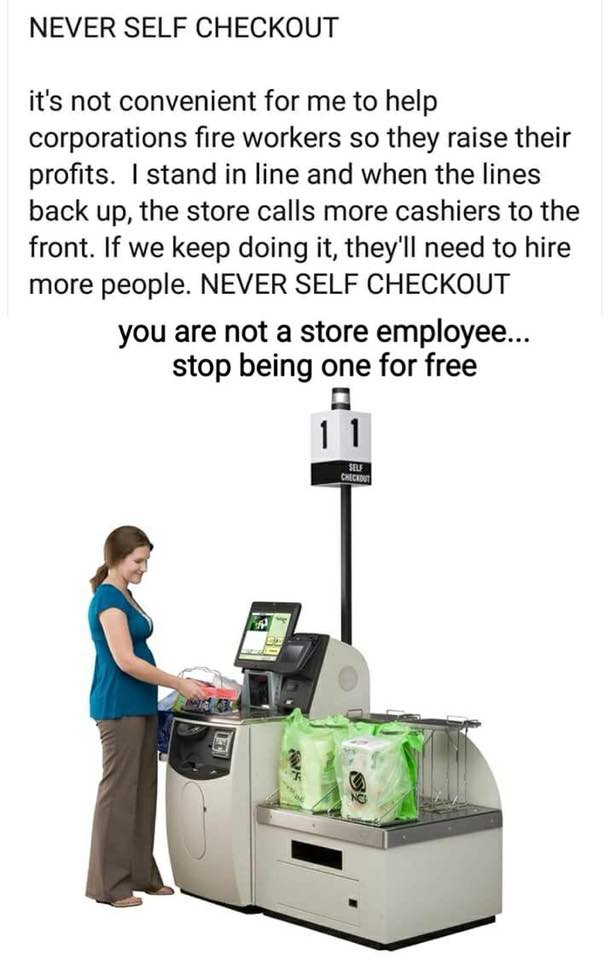 And I've been thinking about this image and comment and concept and here's what I think:

No, you aren't part of the problem. None of us are.

We live in a society guided by principles of capitalism, which means that our economic model rewards businesses who can keep costs low and profits high.

And you know what costs a lot? People.

A self-checkout machine, on the other hand, costs an average of $125,000, which means that a grocery store can make a one-time purchase equivalent to the annual salary of 8.28 bagging clerks.

These bagging clerks, mind you, need to be paid their hourly wage regardless of how productive they are. Most will take time away from work at some point (sick time, family leave, vacation time, etc.) They may also need health benefits. Depending on where you live (I'm not great with U.S. business policy so forgive me) employers also need to pay federal taxes towards unemployment benefits for each employee.

Even if a self-checkout machine sits unused for an entire business day, it doesn't matter because the company has already made a one-time investment in the machine, meaning they don't have to pay it for doing nothing. Sure, the machine may break down from time to time but the cost of repairs is still significantly lower than supporting 8.28 people's salaries and additional costs.

Long story short: a one-time investment in a self-serve checkout machine eliminates the ongoing costs of having multiple bagging clerks. It's cheaper and more economical for companies to invest in machines and automation because our economic model rewards fast and cheap.

"Duh, Alyson!" I hear you saying "I know how capitalism works."

Which is all well and good, but when we start getting into the business of discussing how someone's livelihood is being automated away before our eyes, people start throwing around words like "unfair" and "irresponsible" and "cruel" which misses the point entirely.

Here's why: low-skilled jobs are going away whether we want to face it or not.

That's only 4 years away, folks, and automation hardware and software is becoming cheaper every day, which means companies that have a business incentive to keep costs low (like we discussed earlier) are going to keep replacing bagging clerks and other low-skill jobs until - guess what - they're basically gone from first-world countries.

It's not "cruel" to look at the facts pragmatically and say "this job is going to be automated away."

It's not "unfair" for low-skilled workers to be replaced by cheaper and more efficient methods because that's how technology, progress, and capitalism all operate.

It's not "irresponsible" to accept that fact and choose to advocate for social support systems like a basic guaranteed income, worker re-training programs, and other services instead.

You know what IS irresponsible?

Pretending like a future that is basically at our doorstep isn't coming and blaming "evil corporations" for replacing low-skilled human workers with automated machines that yield a higher ROI, and acting like choosing a bagging clerk over a self-checkout machine makes even the tiniest bit of difference in the long-term.

It doesn't, and it isn't going to.

So how can we handle this transition responsibly?

Having frank discussions about what automation means for people who can't compete in the labour market because they can't learn high-skilled job functions like the elderly or people with disabilities.

Having honest conversations about how our society treats people who aren't able to work because their jobs are being automated away, and how we can implement a social safety net that allows them to lead rich, safe, and fulfilling lives.

Having real dialogues about the damage that the perception of "job = worth" has on how we react to a changing job market that - sorry to say - is never going back to the way it was.

Because a lot of people are going to be out of work really soon, and more people will lose their jobs to automation in the coming years and find themselves permanently unemployed because they don't have the skills, training, or education necessary to fit into a job market that's becoming increasingly specialized. No amount of "choosing cashiers over machines" is going to change that.

So we can keep pointing the finger pointing at "evil" corporations and placing blame, or we can have some grown-up discussions about what life is going to look like for all those people who don't have the skills to compete in the job market.

Does that sting to hear? Sure.

Is it harsh? Absolutely.

And we're not doing anyone any favours by ignoring it.