The dreams of acting offscreen Eating potato pancakes and drinking coffee and hour and a half before hot yoga.

I might throw up during class but that's okay.

Just stay out a deep Camel Pose and you'll be okay, I'm saying to myself. Don't tilt your neck so far back during Cobra Pose, don't lean your head all the way down during Downward Dog.

Luckily not upchucking is the only thing I need to worry about.

Nothing silly like alighing my chakras, or balancing my chi.

And, sure, maybe I could avoid these self-induced dramz if I wasn't eating potato pancakes and drinking coffee before going.

But when yr bf wakes up on a Saturday to make you tasty eats it's not like you can say no.

You eat that stuff with a smile on yr face and be thankful for it.

She owns a lot of nice flashlights Maybe you won't get everything you want in life.
Maybe you won't jet set to Cuba every six months, maybe you won't own a fleet of BMW's and maybe you won't be famous like Steve Jobs. You could get hit by a bus tomorrow
You might live 'till you're 102, produce six kids and live on a farm raising llamas.
Or maybe you'll adopt some cute kid from Ethiopia and live in a flat in Boston somewhere.
Maybe you'll never get married, never shack up,
be rocking' bachelor(ette) for the rest of your days.

But isn't that the joy of it? ('fag' as in cigarette, btw)
Not everything will make you happy.
Some days will be worse than others, some days will be total shit.
Some days you'll spend hiding in the bathroom at work crying because while you can't go home, you can't act like everything is okay, either.
There will definitely be times that you feel devoid of every possible emotion except despair, longing, infinite sadness.
Maybe you already have.
You'll feel like you'll never get over it, get out of it, move past it.

But you will
or at least most of you will.
If you happen to leave or lose a small part of yourself with whatever happened consider it a worthwhile loss.
We can't ever emerge completely whole from our traumas otherwise we'd never have spaces to fill with new, better parts of ourselves. People will hurt you, people will take you for granted and people will certainly, definitely, absolutely take advantage of you.
They'll say things behind your back, snub you, try to one-up you at every turn.
This is the nature of some people
and the only way to win the game is to simply not play it.
Put egos and pride aside and just walk away.
It's sometimes the harder choice to make, but it's always the best and it certainly won't be the easiest, especially when the one hurting you is someone you once thought was a friend.
But that's life sometimes.

Some people are pieces of shit.
Most aren't.
It's up to you to make the distinction, and keep those people close to you.
They'll show their real colours in the end.

Find joy in the small things in life.
A warm day in January, the feeling of underwear warm from the dryer, of eating ice cream and chocolate chips after you've had a particularly long day (screw the calories)
The big stuff like vacations, property values, expensive cars
they all have their place
but in the grand scheme of things shouldn't compare in any way to walking in the door and seeing someone you love waiting for you.

Listen to the people around you, or maybe don't.
Figure things out for yourself and by no means pay attention to what I have to say to you.
It's just my blog, and my feelings.
And what I think I've sorted out so far.

I hope it works out for me.
Tags: Uncategorized
Tweet

We'd take a limousine 'cause it costs more 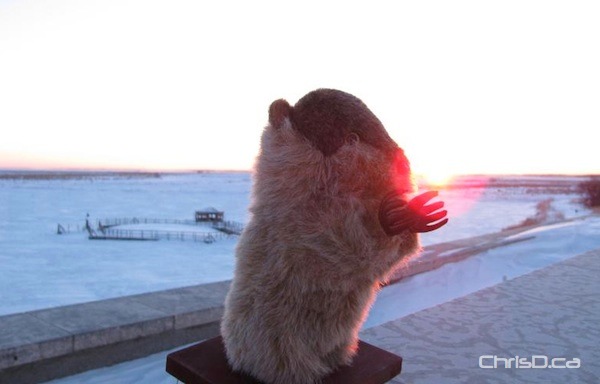 I already feel a stab of pity for people who still get excited about stuff like Groundhog Day. I'm pretty sure that whether or not a groundhog happens to see his shadow or not is a worthy indicator of how much longer we have to deal with sub-zero temperatures.

But here in Manitoba we like to take things a (few) step(s) father.

For insnace, did you know that our groundhog is named "Manitoba Merv"? Yeah, our annual predictor of seasonal change is named after a smelly old guy who used to hang around the clubhouse at one of the municipal golf courses that my dad runs, hanging out around the canteen and harassing the girls working cash to "prime his hot dog" for him.

If that isn't ridiculous enough, our groundhog is a puppet. It's in the above image. I'm also fairly certain that my dad had a cover for one of his golf clubs that looked exactly like that when I was growing up, and I am going to venture that perhaps that's what Manitoba Merv is. If not, it's a pretty unrealistic-looking groundhog. Where are my tax dollars going, exactly?

We actually have news reporters who are covering the fact that a synthetic, pretend animal used its no-vision to not-see its shadow.

Do any other provinces have silly names for their groundhogs? And if so, are they also potential golf-club covers?