Some girls throw up to be skinny

This one throws up for 'art'

and gives a new meaning to the phrase This week couldn't end fast enough between huge painting projects at home and archiving and filing and a million paper cuts at the office and a super-exciting-but-exhausting rally yesterday and a bunch of hippies getting mad at me on the Internet today. What a week!

It's also this cool kids birthday.

This is my littlest sibling and he'll be all of 19 tomorrow which means I'll be taking him out for a liquid lunch even though he doesn't know it yet.

We haven't gotten together since we saw each other at Christmas because he's busy learning how to pimp out repair airplanes and instructing youngsters and being every girls biggest crush.

I don't see my fam all that often, even though we all live in the same city we're usually too busy to all get together and they all live out in the suburbs where everyone's houses look the same except for different shades of stucco and I just don't like going out there. Living downtown has changed me too much, I think.

I remember when I idolized that neighbourhood and wanted a McHouse (we're middle class, no McMansion for us) of my very own and 3.5 kids and dog and one day I woke up at my safe Government job and realized that was what I was setting myself up for and I jumped ship as soon as possible.

Now I live in an old heritage building with my boyfriend, our neighbours are a bunch of hipsters and a crazy kayak lady and there isn't a single house on my street that's maybe forty years old. I get my groceries from a family-owned store up the street where they get samosas delivered every morning and there's a bangin' popular sushi place just around the corner.

The idea of having a lawn and a garden shocks me and the idea of having children makes my uterus do flip-flops. I don't want a house or a 9-5 that I can't move on from after I've learned all there is to know.

Sometimes I think about what I wanted for myself at his age and how much that's changed in a few years and I wonder if my brother will start to want the same things. Or maybe he'll want to live the suburban dream, too. Or maybe he'll want something totally different from what I, or they, want. I don't know. omgomgomg
I kind of have a crush on Jack Layton

so true to my word I

got my boyfriend to fix it

fixed it for your reading pleasure.

if you're using any other browser here ya go!

Thanks for tuning in, dears! xo

You are the light

My floor did the 'ol Office Shuffle a few weeks back and as a result I wound up sitting at a different desk than the one I used to.

Usually I don't care about where I sit as long as I have a place to charge my iPhone while I stream music all day but since I've moved I've noticed a marked difference in my energy level and how alert I feel that doesn't seem to level out no matter how many cups of coffee I pound back.

As a result I wind up going on walks around the office to wake myself up a bit and after strolling past my old desk I think I've realized what I'm missing: my old lamp. Okay it wasn't mine which is why I didn't bring it with me but my new desk sits directly under a string of horrible fluorescent lights and gets almost no direct sunlight, unlike my old 9-5 home and now it's got me thinking about all the stuff Richard Kelly said about ambient luminesce.

Architectural lighting has always been interest of mine, especially modern buildings and use of light in public spaces.

Some I really like are the Roy Thomson Hall in Toronto: 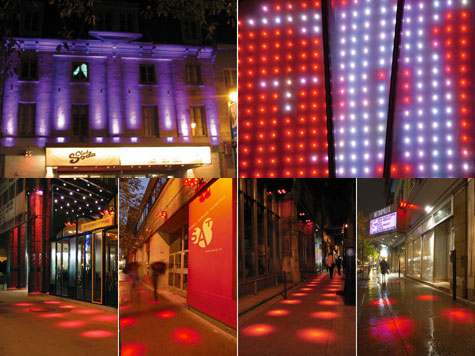 which admittedly I have been to -I went to Club Soda when I went to MUTEK last summer- but I was there moreso for the music and less for the art, so I want to go back when not in full-on party mode.

Oh, and I love basically anything designed by Le Corbusier. The guy was a genius and designed some of my favourite buildings ever which I'd share here but this post is picture-heavy enough as-is.

For additional learnin' you can watch this great TED Talk about light/dark by Rogier van der Heide:

Now if you'll excuse me I have a lamp to go steal back.
Tags: Architecture Design Light Uncategorized
Tweet

The Greatest Movie Ever Sold


You guys know I'm a sucker for anything meta, and basically this movie is blowing my mind.

I'd seen the trailer a while back but wound up watching Morgan Spurlock's TED Talk today in which he auctioned off the title of his TED Talk to the highest bidder which in and of itself is genius and it reminded me of how anxious I am for this film to be released (plus, the talk is hilarious so give it a watch).

I've always been kind of hyper-aware of product placement in films and TV shows and it's really interesting to see someone making a movie about acquiring product placement and how it actually works, and what companies use as determining factors in deciding who to fund and how their products will be displayed.

It also feels really appropriate for the age in which we live, where we're all hyper-aware of not only our impact on other people, but also of theirs upon how we make our decisions and live our lives and you can see a lot of that with shows like The Simpsons and 30 Rock, and possibly the most self-referential and meta TV show around, Arrested Development, which I am mega heartz over.

I mean, does anyone remember the scene where they keep going on about Burger King? It's gold!

It's a great restaurant!

I really wish they hadn't cancelled that show.

Party with the star types and mingle with the industry went out last night with my 'kinda famous friend'
(inside joke)

met up with some of the Winnipeg Twitterati for #SecretHandshake

ate the best damned spinach and artichoke dip ever

and forgot to take pictures of it all

it's Good Friday so make it a good one