Woke up early for no real reason and spent the morning on the couch drinking tea and working my way through the first season of American Horror Story - it's my first time watching through (I know) and I'm hooked.

Obviously this turned into having a late brunch and now I have to squeeze a run, tidying up & getting ready into the few hours before meeting up with my whole fam for Thanksgiving dinner.

Slow clap for this one.

Tonight is the first time that John will be meeting my whole family and I'll admit that I was a bit concerned (we Shanes are an unpredictable bunch) and then my mum sent me something super sweet: 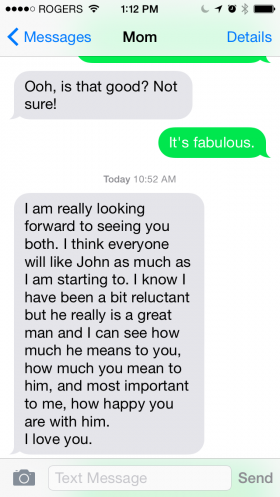 Which just made my day.

Usually I try to keep things relatively PG here on Hip Hop Sunday, but then I received this magnificent tweet from Colin Koop which reminded me that I have responsibilities to attend to.

This is the first time in over a month that I've been able to actually sit down in front of my iMac and hammer away at this 'ol blog like I so love to do.

It's been a whirlwind few weeks as I think I've articulated pretty well here and this weekend marks the last time that (for a while anyway) we had to run out and get new furniture or replace something or move something from one place to another.

After running around and setting up the shared House Creative Space and hosting friends for drinks and games last night, this morning we actually slept in and woke up with nowhere to be.

I spent the day lounging around, puttering around here and there. Mike, Alicia, baby Rose and their dog Ginger stopped by for a lovely afternoon visit and I ate too many pasta leftovers from yesterday.

Everything feels like it's the way that it's supposed to be.

Hope your Sunday has been half as good as mine. 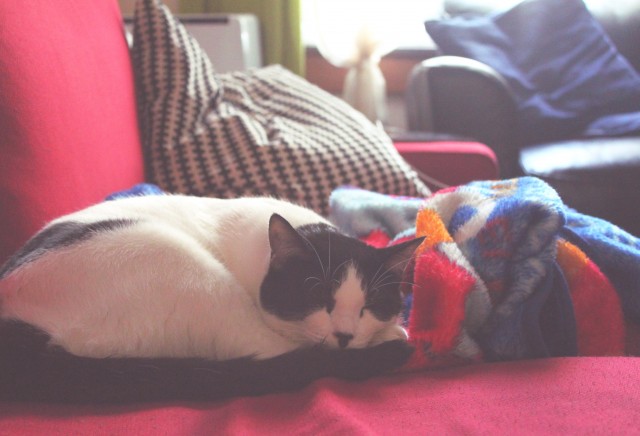 to the House At Bear Corner (Five Doors Down)

and stayed up until the wee hours of the morning listening to music and hanging out and spending some much-needed downtime together after a whirlwind couple of weeks.

We slept in till 2pm and rolled around in the down-filled duvet and talked about silly things and laughed.

Oh god, do we ever laugh together.

When we finally peeled ourselves out of bed it was to order some sushi via the ever-useful SkiptheDishes.com which we inhaled the moment it arrived.

John is at a meeting with some other campers at the moment and when he gets back we will make tea, play Xbox, and probably eat croissants later.

The sun is coming out a little and the house smells like the rain we had last night. I'm sitting on the couch with my feet up and a little snoring kitty next to me and everything is perfect.

Hope your day is perfect, too.

from rearranging furniture and sorting and throwing things out

making room for my things

Hope you're one of those things, too

Finally around on a Sunday to take care of this 'ol blog tradition.

Today's feature are the Winnipeg-based, super talented, The Lytics

who put on a stellar performance

despite some ongoing technical difficulties

and were super nice about it

and wished everyone a great weekend when their set was done

hope you had a great weekend!

which isn't a bad thing, but it'll be nice to get back to normal

and wrap up the summer real nice.

It's been a hell of a ride.

Hope yours has, too.

Spent the afternoon on the couch watching OTNB and nursing a headache from friends and BBQ and laughs the night before.

It’s supposed to be dry this week so I have to head home and water my garden which is bringing me so much joy.

Who knew growing and eating things could warm yr heart this way?

Last Thursday night J, Colin and his lovely lady stayed up late on a school night to catch the Ghettosocks show at Le Garage

which was amazing, of course.

I'd originally intended to post another Ghettosocks track, but was so impressed by Relic's performance

(also that he gave me a free cd, thanks!)

that I figured I'd give props to such a super-talented dude.

Definitely check out his stuff!

Now if you'll excuse me I have white wine to drink and a festival to prepare for.

It won't stop raining and I am going crazy.