An Ode to the Playground of my Youth 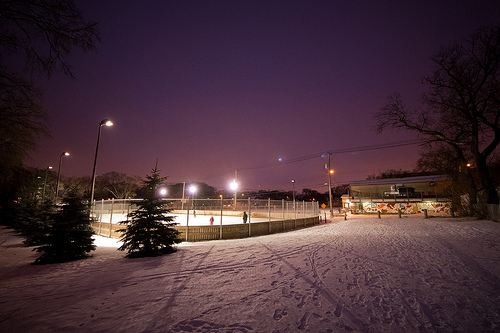 The Red River Community Centre
down the street from my house, a few short blocks away
on the corner of Murray Avenue and Donan Street
surrounded by ditches, a baseball field
hockey arenas lay empty and stinking of piss and sex in the summer.

Made with wooden beams and pillars
rough to the touch, watch out for splinters
picking them out of hands, feet, knees,
until there were too many and ignoring them became easier
than pausing a game to squeeze them out.

The slide that was removed before I can clearly remember
the empty wooden tower where it used to be
where I vaguely recall hot, silver metal glinting in the sunlight
the burn of it on my bare legs
sliding down towards welcoming, outstretched arms.

Sand instead of little pebbles
which got in your eyes when you fell down
or got kicked up during a game of Grounders
while scrambling to get from one surface to another.

The big, fat tire swing that was the beacon of summer
suspended by three thick chains in a plastic coating
sticky and black from hands and sweat by mid-June.

Under-ducks and spinning until we were nearly sick
almost hitting our heads on the overhead beams
grabbing on and spinning, suspended in the air
that time my brother kicked someone in the mouth.
Thank goodness they were all baby teeth.

Monkey bars, hot to the touch in the afternoon light
seeing who could jump the farthest
past the first, second, third bar
each summer we got farther until we were too tall to jump
and could walk from one side to the other.

Riding our bikes in circles around the parking lot with no lines
just gravel and broken glass and prickly weeds
the occasional car with frisky teenagers in the back parked at the far end
tucked away from us and our raucous noise
exploring new landscapes with the windows half rolled down.

The community centre, barely a shadow of a building
made of white brick and smelling like used sports equipment
the crowded area where I would lace up my skates
and drink cheap, watery hot chocolate with my dad for .50 cents.

One year my parents signed me up for daytime summer camp
where we played sports and did arts and crafts
went on weekly trips to Kildonan Park or Fun Mountain or Oak Hammock Marsh
and I spent a furious afternoon trying to cut through a recycled paper plate
carving it into a snake which I decorated with markers and sequins
and lost while chasing frogs on the way home.

The park, like most of my childhood haunts, is gone
replaced by a monstrosity of steel and glass
which encompasses almost all of the green space where I roamed,
a skate park where the soccer fields and their empty metal nets used to be
fake palm trees where I laced up my first pair of cleats.

I mourn for these places, now.
I wish that I had understood the humble, fleeting magnificence
of the happy, blissful, sun-drench days I spent there
eating gummy candies acquired from the gas station up the road
shaped like blue feet, kissing lips, fuzzy peaches
worrying about nothing except how late it was getting
and when I would be able to make my way back tomorrow.

he's 60 which means that he was the age of the guy that I'm dating when I was born. Wrap yr head around that.

I didn't grow up listening to Costello as my parents (bless their hearts) had questionable taste in music besides blasting Elton John during Sunday morning house cleanings.

The first time I really heard Costello was sitting in a coffee shop downtown drinking a London Fog with a boy I was dating who was into photography and had just finished taking my picture in the December snow in a dress that was far too short for the wind chill that night.

I don't know this song

that's unbelievable! I'm taking you home and we're going to listen to all of his greatest hits and then some because it is a travesty if you don't know Costello.

and he made me hot chocolate and sang Alison

which isn't spelled right but whatever

I know this isn't a very good song

by a band that isn't all that great, really.

But sometimes I get it in my head and can't get it out no matter how hard I shake it or listen to Royal Canoe.

The first time I really listened to it

was while walking down the street in Hamilton when I lived there.

It was spring but still cold and I was walking around puddles and I was sad because I missed Winnipeg and everyone in it, even though I would have never admitted it at the time -to myself or to anyone.

I walked around and was thinking about my boyfriend and my life and how lonely I was even though I'd left on what was supposed to be this grand, life-changing adventure

it didn't really change me at all

at least, not until after it was over, anyway.

This song was on a playlist that my then-boyfriend had put together for me and as I walked through the weird, kinda-scary tunnel under the train track hill to pick up my sushi and sashimi Saturday night dinner for one I realized

you hold me down.

Which is never a good feeling

because things got complicated after that.