Dan Harmon is no longer the showrunner for Community 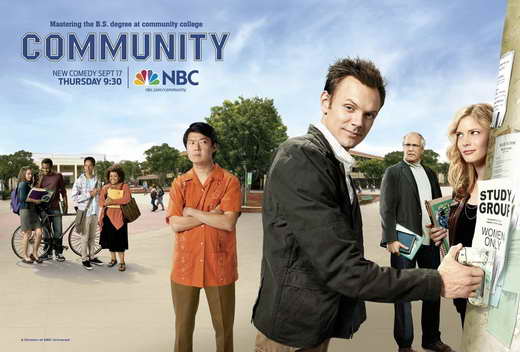 which is my favourite show.

yeah sure Game of Thrones is epic and Mad Men is dramatic and Breaking Bad has some of the best cliffhangers ever, but Community manages to be fresh and real and interesting every damn episode and particularly the 3rd season which has the episode with the multiple storylines, the two-part pillow fort vs blanket fort episode, an Law & Order spoof episode and the one where it's all in a videogame.

it's funny and quirky and weird and so meta has some of the best writing I've ever heard in a tv show. which for some reason means that NBC decided not only to move it to a Friday slot where it will most likely get cancelled because Friday nights are where tv shows go to die but they've also replaced Dan Harmon, the creator of the show, for reasons that even Harmon himself doesn't understand.

Community has a huge cult following, it's original and creative television and there isn't anything else like it and right as the show is gaining momentum the network is pulling the plug and for what?

so other fine NBC programs like the following can have more airtime:

The Celebrity Apprentice
America's Got Talent
The Biggest Loser
Fashion Star
Who Do You Think You Are?
Off Their Rockers

why is it that shows like Arrested Development and Community have to bite and claw to stay on the air (and we all know what happened to Arrested Development, another fantastic show) while trash like Jersey Shore and Toddlers and Tiaras are given prime-time slots and pushed down our throats?

what does this say about our society that 'popular television' isn't shows where clear thought, time and love have gone into writing and producing each episode, but rather glamourize addiction, pressure to be thin, or lunatic mothers who think dressing their little girls up to look like prostitutes? what is wrong with us?

what happened to Dan Harmon, and is happening to Community, is just another example of how stupid and ignorant people in our society are becoming. that we'd rather watch fat people try to lose weight than a show that makes us think, laugh and feel something.

so in summation, FUCK YOU NBC. you've officially destroyed a wonderful program that nobody but your corporate executives wanted to see go away.

Tonight I have a dinner & golf date with this smoke show 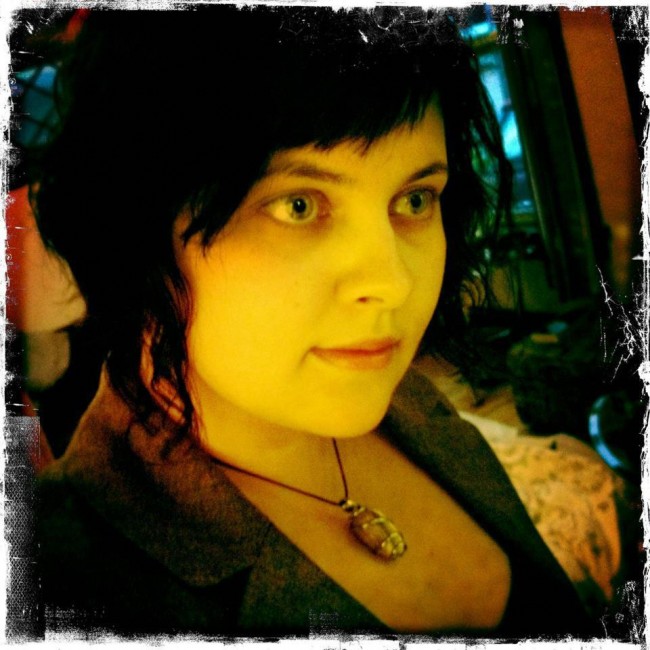 and you're not invited because it's a private affair.

howevere there's all this ish happening tonight, so gtfo

Does this mean I can travel there on the cheap? 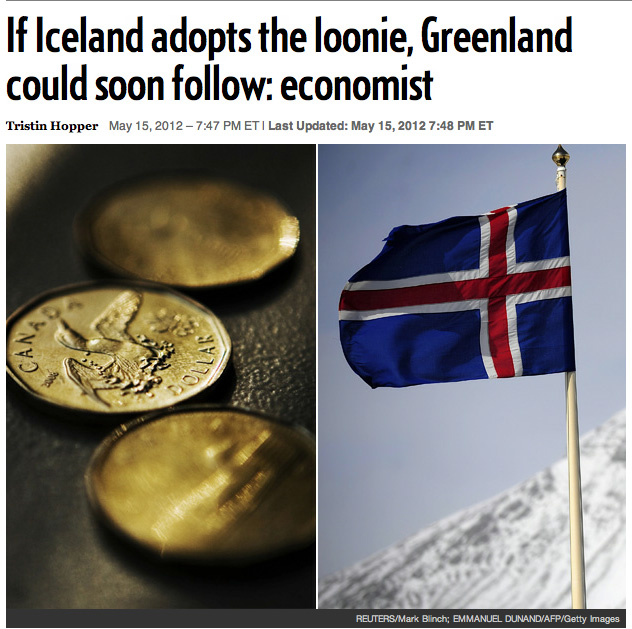 'Cause I hear Reykjavík is quite the party town.
Tags: Uncategorized
Tweet

sometimes I think the world is effed

there's so much needless hate and anger

people killing each other over nothing

fighting because they can't get over themselves

or won't just try and get along

(though certain ones deserve it)

forgetting that really we're all part of one big world

just like Prof. Yakko Warner explained to us when we were kids 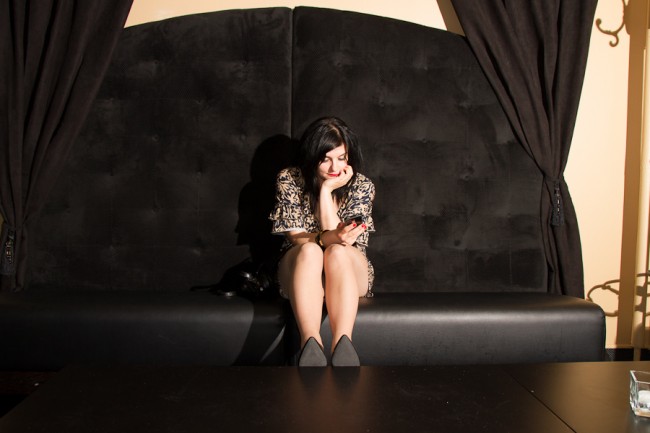 which is amazing to say the least, because Movement is a MASSIF festival which will blow your mind should you go, which I haven't but Alex-lee has and he says it will change your life so, go.

but if you can't, and you're in Winnipeg, which I am, come to this show

I'll be there, dancing my face off and live tweeting the event and taking photos of our lovely MEME fans the whole night.

there's seriously no cooler place to be tonight, ffs.

that photo Kat took of you is ALL ABOUT YOUR BOOBS 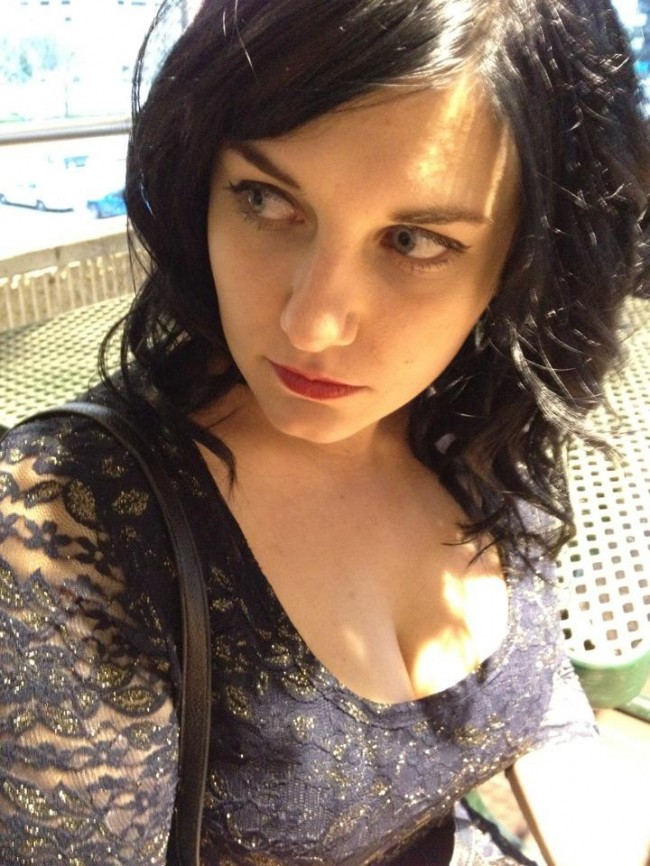 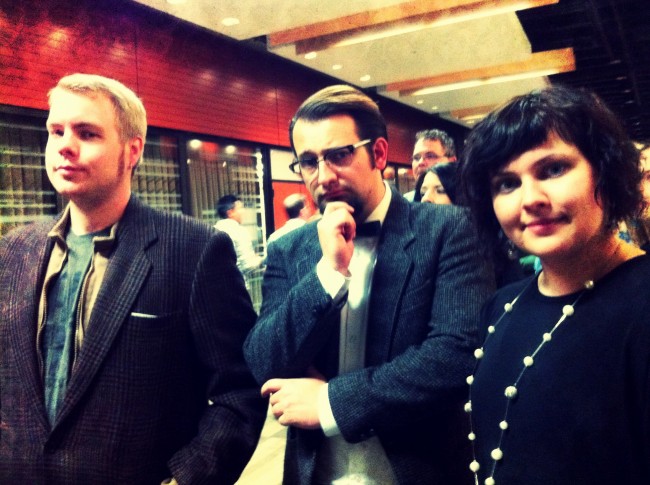 the Winnipeg Wine Festival is one of the highlights of my social calendar year because I get to dress up with my friends and go drink wine I couldn't otherwise afford and nibble at bread and wear heels for too many hours and share a lovely evening with people I love. 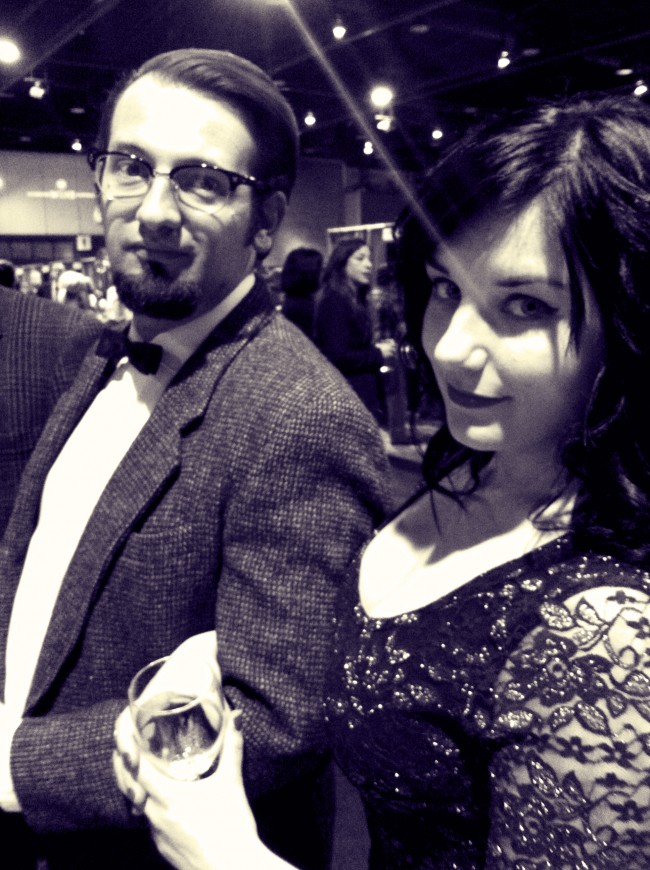 Tyrone brought out his special Professor Plum look for the occasion and I wore a navy dress covered in gold lace which didn't look nearly as much like a giant doily as I had originally anticipated so I knew we were off to a good start. it took me over an hour to curl my hair like that so I hope you guys who saw me appreciated the tremendous effort it took, particularly after I had to bike home in terrible wind and was in rough shape when I got home. I clean up for you. 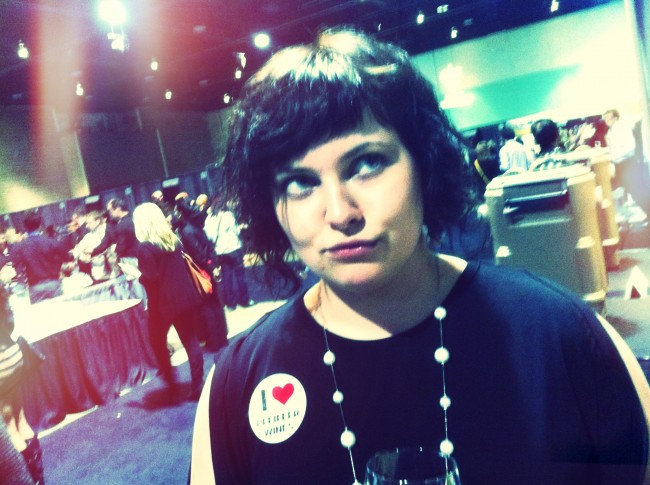 the first vineyard we tried wasn't very good but they gave us stickers which we proceeded to try and pawn off on each other because in truth none of us hearted the wine that much, to be honest. instead we fell in love with Australian mead and rose port and splurged on a delicious antipasto tray halfway through (though next time we're going to be wily and cheap like the ladies we saw, and bring cubes of cheese in ziplock bags... maybe). 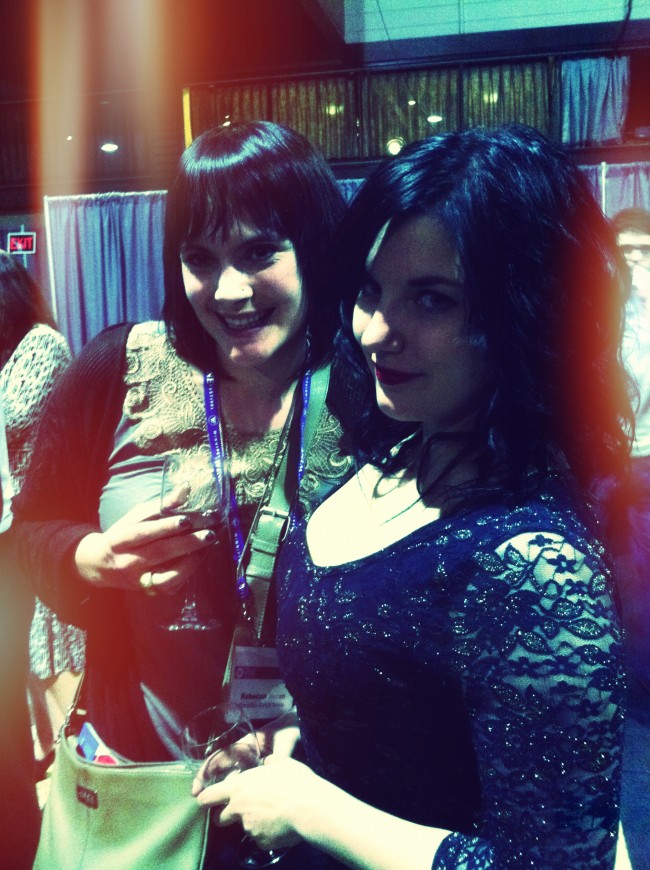 4sq told me early on that Rebecca Horan aka Fashion Flirt was also present and we spent most of the evening trying to find one another without totally abandoning our groups and eventually met up (near the port table, of course) IRL for the first time. When Winnipeg Bloggers Collide, woah! And btw yes she's just as lovely face to face as her photos make her seem. Yowza.

eventually we made it home where more wine, port and a couple'a pizzuh's were consumed before Tyrone got sleepy and I had to "kick everyone out" as Jason put it so we could go to bed in time to ride these bad boys to brunch: 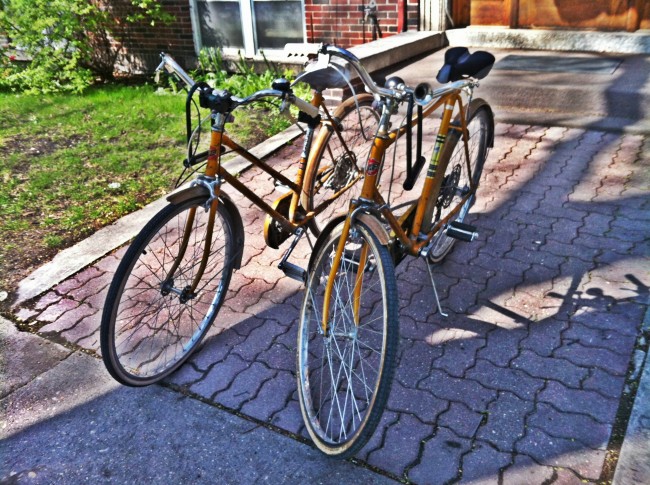 which was had at The Falafel Place with lovely friends in a fansastic corner booth where we talked about internet startups, nail polish, The Weakerthans, durans, stinky fish, cross-dressing, pig's ears and lots of other stuff while I inhaled this plate of heavenly hangover food: 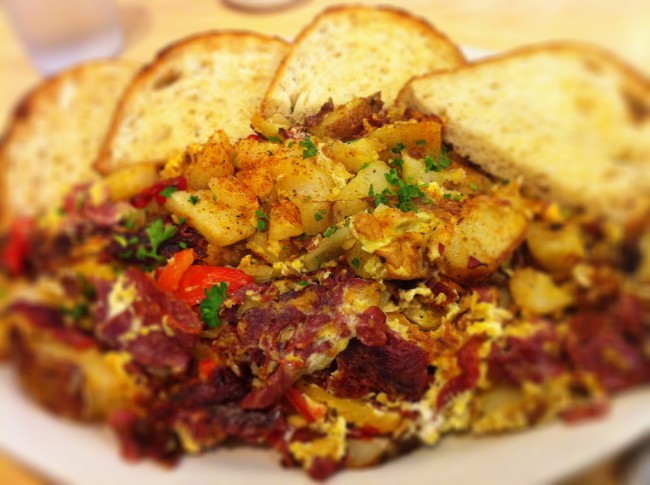 when I was little I had a different dream job 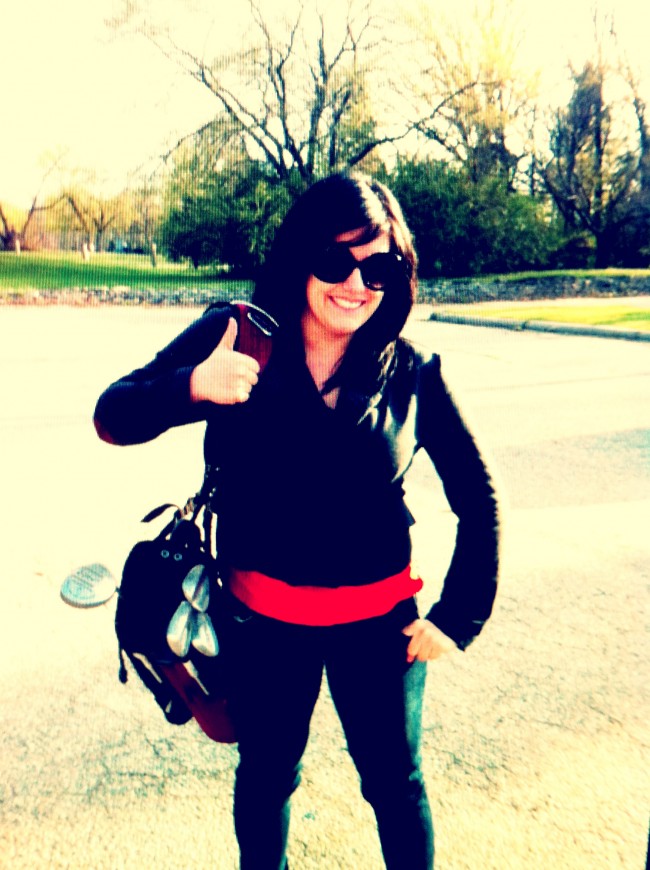 I wanted to be a golfing farmer.

I basically grew up on Kildonan golf course and obviously was into golfing when I was younger, which was somewhat spoiled by the fact that when I was 10 years old my dad took my two younger brothers and I golfing and my middle brother hit me in the stomach with his club by accident and I got very sick and threw up all night

and I also stopped golfing.

it's funny how that works, my dad says, that teenage kids get 'too cool' to golf and then once everyone graduates highschool and starts to actually grow up and stop being 'too cool' for everything, golf becomes something that a lot of people get into.

I'm not sure why, maybe it was the golfclub to the stomach incident which was lingering with me or the fear that I'd be terrible or laziness or a combination of all three but I found out that my work does an annual golf trip every summer and decided there was no time like the present to start hitting the fairways

(at least I remember the terminology)

so this evening I spent some quality time with my amazing dad and he took me out to one of the public 9-hole courses, Crescent Drive, to go whack some balls around and see if I was still any good

which it turns out I am.

after flailing about on the first two holes we caught up to a group of teenage guys who my dad dubbed the "weekend warriors" who clearly had seen me sucking on the previous holes and decided to be 'gentlemen' and let us play through them because obviously they wanted to see how badly I would do because, honestly, I was doing pretty badly. so I lined up and pushed my hair out of my face and kept my eye on the ball and whacked that sucker over 150 yards.

turns out I don't totally suck at golfing, after all.
Tags: Dad Family Golfing Uncategorized
Tweet