are basically what I remember from when I first began really using The Internet.

my parents got us a family computer when I was in the 6th grade and in true parent style it was a hunk of junk and something that my friends who knew me then still make fun of me for. guys I dated in highschool either spent their time fighting with me, on the phone with me troubleshooting my computer, and sitting in my parent's basement trying to remove all the malware and trojans and misc viruses my brothers got from looking at pr0n irresponsibly (c'mon, I've never gotten one virus from that, once).

oh and deviantart too, I think. oh no, it was elfwood. wow, just checked out that site and it's basically pictures of faeries and Middle Earth and stuff, don't even click there it's embarrassing I even went there. but aren't most sites we visited when we were younger embarrassing?

case in point: I just showed Tyrone a picture of the Neopets site (I think) when I used to use it, in grade 8. it was freaking huge I tell you, we had to fight each other for computers to use at lunch so we could collect fake money and play stupid games like a Neopets version of Snake (which I was very, very good at).

can you believe I played something that looked like this? that the guys in my class played it, too?? what was wrong with us.

oh yeah, we were stupid kids.

in highschool things got marginally better. My friend Eric (remember him?) introduced me to ebaumsworld, boingboing and penny-arcade
(remember when they got sued by American Greetings for that Strawberry Shortcake parody?)
among other things. finally I was learning how to use that vast interconnected series of tubes -and I hadn't even discovered online pr0n yet!

and with that came the days of Xanga, LiveJournal and DeadJournal (who had one of those?) blogging! everyone had one! back before we knew how to insert photos or do anything but complain about that bitch you saw while your mom was picking you up from the mall with your friends after you blew all your money (15$) at Sirens (if you were a sloot) or Frenzee (if you went to raves like I did)

yes I went to raves, but that was back before they got disgusting and sketchy and places I now generally avoid, so, not really not really since highschool in case you were wondering, and no I never looked like this: 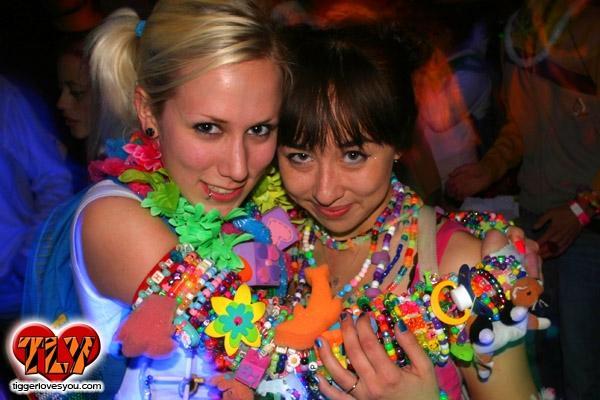 because kandi is stupid)

and now I've totally lost my train of thought about the years of Internet Antiquity for me because I got lost looking up pictures of people I knew partying way back in the day, how did I even get in to those parties? oh right I knew people. who doesn't 'know people' though? Everyone knows someone, that doesn't make us special.

but I was 16 and thought I was. though didn't we all.
Tags: Computers Nostalgia Raves The-internet Uncategorized Video-games
Tweet