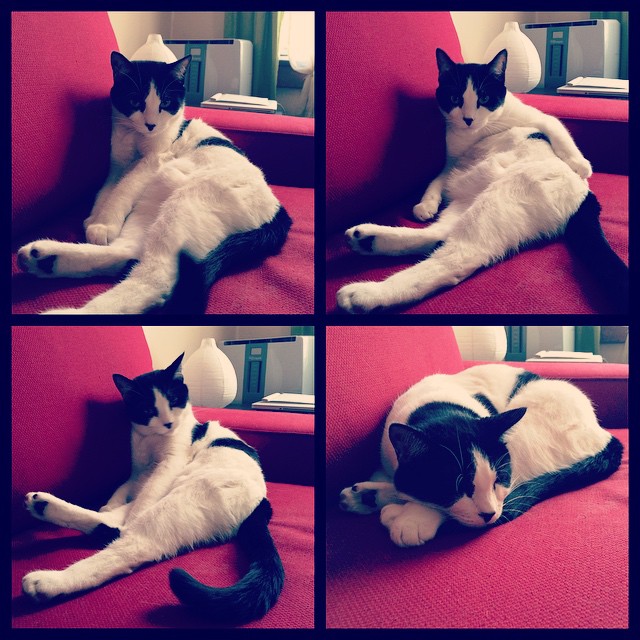 so to celebrate let's talk about my favourite weirdo cat, Toulouse Lautrec.

I picked up Toulouse after a day of shopping with friends and scrolling through Kijiji ads over baklava and coffees. I called the lady who was giving him away and we drove over to a house in St James which was cluttered full of stuff and full of cats. She put Toulouse on my shoulder and he crawled behind my hair and started licking my neck and I fell in love.

He was just a little guy, then -probably too young to actually be separated from his mum, now that I think about it- and attached himself to me immediately.

Whenever I come home he runs to the door to meet me. 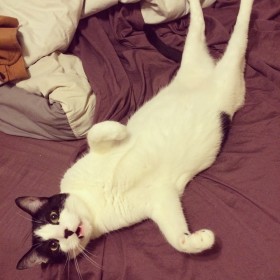 When I'm in bed he insists on crawling on the pillows above my head and keeping me warm by being a furry hat.

He loves to knead my neck and lick my hair and sit in weird poses and lives for belly rubs.

In fact, if you start to pet him within a few seconds he'll be on his back with his tummy exposed, looking at you with an expectant look that says

which everyone does, because you can't say no to that face. 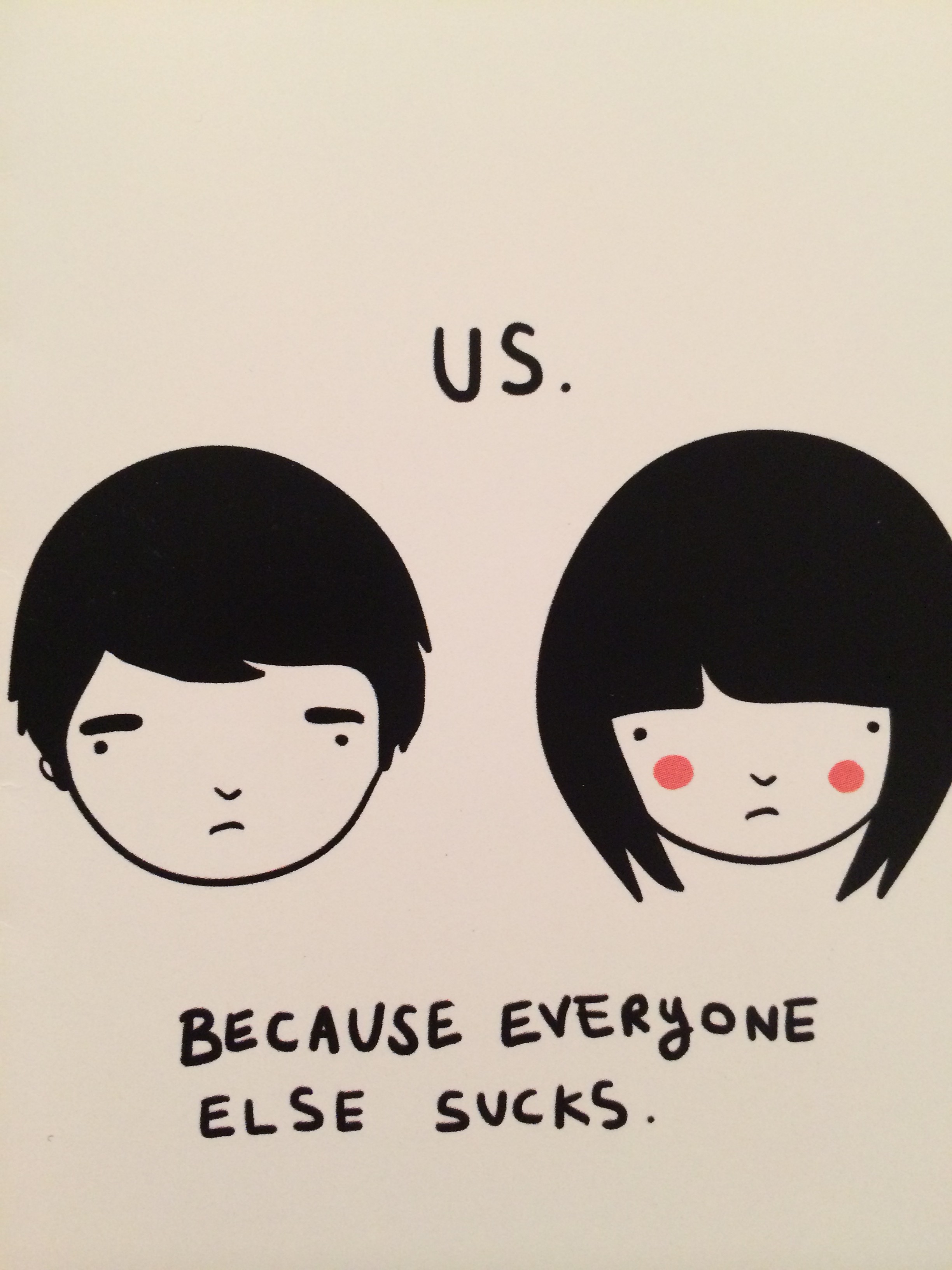 Let's take a moment to reflect on darker days


(WHY COULDN'T MY DAD EVER JUST ASK IF I WAS ON MSN BEFORE HE PICKED UP THE GODDAMN PHONE?!)
Tags: Black Cop-out-posts The-internet
Tweet

The web pages I frequent summed up by the general types of posts I see:

Facebook: “All the people on my friends list are going to pile on to 1. Defend your point or 2. Go on at length about how wrong you are.”

Online newspaper publications: “I like commenting anonymously because I can say all the ignorant things I want about issues I know nothing about.”

Reddit: “Your statement makes me feel bad about myself. Time to take it personally and out of context and fight with you about it for a day and a half!”

Am I angry because of the Internet?

Brian Fung at the Washington Post published an article stating that the Internet isn't making us dumb, it's making us angry.

Which doesn't make me angry per se, but it definitely makes me think of the stuff I say and do online, and how it makes me feel afterward.

In a study of 70 million posts on Sina Weibo, China's version of Twitter, Rui Fan and a team of others at Beihan University tracked the spread of joy, sadness, anger and disgust across the social network. According to the MIT Technology Review, they found that angry tweets were far more likely to be retweeted by others — or be the subject of angry responses — up to three degrees away from the original user.

Maybe things are different in China but if you tweet a bunch of negative shit you're getting an unfollow from me. I don't think that it's the internet is making us angrier, it's that it gives generally negative people a soapbox to broadcast their negativity to everyone else, specifically when it comes to sites like 4chan, Reddit and etc where you have a fairly large degree of anonymity and because of that are able to to disregard regular social conventions and straight-up be a jerk to people.

That kind of behaviour and the negative tweets Fung refers to in his article aren't the products of the Internet, these people would be just as negative, destructive, horrible, disgusting, and whatnot regardless of whether or not the Internet existed. Their bad qualities would simply manifest themselves in a different way.

The one thing that the article neglects to mention is the fact that, before now, we didn't have a global public forum to express ourselves and there was no global public record of it before now.

We can't go back in time and see a timeline of what millions of peasants in the Dark Ages had to say. Though I'm sure it would sound something like this:

(via Reddit, o'course)
"My whole family is wondering why this binder with two squids inside was left on my my porch" I think it means it's going to be a good day

which freaks me out.

one of my profs asked today if anyone has a blog and I was the only one who put up my hand. this is the third time that's happened this year and I'm developing a bit of a complex about it because when I do everyones heads turn and they look at me like I'm this antiquated freak.

who do I think I am? why am I putting my thoughts on the Internet?

one girl asked me if I got paid to do it and I said if she meant was that how I made my living, no, and she said well then what's the point? and that bothered me.

I remember back when it was cool to blog, back when everyone had one and I was just starting to get into them because I had shitty dial-up until like '06 because I lived at my parents house and as a result doing basically anything was a huge hassle. I found out about it because my friend kira wrote a blog at manicidosyncratic.blogspot.com that she used to be obsessed with that isn't around anymore.

I started a blog because I envied how easily she seemed to talk about everything in her life. she just put it out there, boom. typed and hit 'publish' and maybe regretted it but the blog never saw that. she had connections with these equally interesting, thoughtful and crazy writers all who she communicated with all the time. she had public fights and falling-outs and flame wars and it was amazing to watch, this brilliant and beautiful girl that I knew making her mark on the blogosphere. 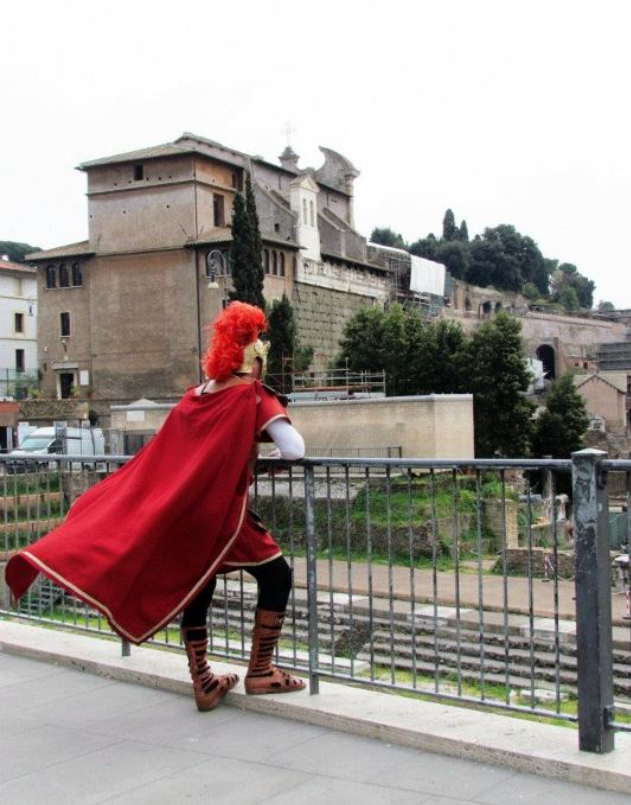 do we still call it that?

nobody in any of my 'communications' classes knew what it was.

especially because most of the blogs that I used to read that I considered to be "good blogs" have just become vehicles for promoting crap that they probably would never use in real life if someone wasn't paying them for it. I'm not saying I don't think it's okay to blog about a product you like, or an experience you were lucky enough to have comped but if that's all a blog is -just a place to advertise stuff without any actual heart, soul or thought that otherwise goes into it- is that still a blog?

or is it just a commercial with a blogger's face slapped onto it?

I think that's what has ruined blogging. nobody wants to share their lives or be frank or sad or angry or drunk or fucked up anymore because there's the possibility of getting a blinged-out necklace or a car for the weekend or a trip somewhere if you just sell your soul & your integrity off to the highest bidder a post at a time. heaven forbid that there's an actual person underneath all that jargon with something real to say.

which is what we used to want to see.

which I think is why a lot of blogs -the good blogs- have died out. been privatized or shut down because the people who give a shit about writing feel like there's no point in putting it out there because if so-and-so is going to an MTV party once a week who wants to hear about what I did on the weekend or what I thought about a movie or whatever.

I think that's why people who don't write blogs don't know about blogging except for the Jenna Marbles' of the world (which is mostly vlogging but that's a different story) which is a damn shame because it's these everyday people that should be blogging in the first place. it's their experiences that make blogging important and interesting, not what the same six people did at the same party which they all attended every weekend for the past year.

maybe it's because I came late to the party, but blogging means something different for me. which is why I still do it.

which is why I wish you did, too.

but with the attention people pay to blogs these days, I doubt you even finished reading this.
Tags: Blogging The-internet Thoughts Uncategorized
Tweet

why we're not Friends on The Internet

don't get too upset if I unfriended you or unfollowed you or didn't respond to your request on linkedin or we were never friends in the first place and you wannabe. it's just not gonna happen. maybe you tweeted a bunch of stoopid shit and I got sick of seeing it. maybe you kept inviting me to events in a city I don't live in or even events in the city that I do live in but your events suck and I don't wanna go. mebbe you're just bad at the internet and I got sick of looking at your 9gag posts (reddit rules). maybe I just don't like yr face.

the problem with cutting people off on the internet is they get all offended about it like somehow the Internet matters like OMG HOW DARE U BLOCK ME U BITCH or whatevever. some people get all passive-aggressive like "omg you unfriended me but I don't care SEE" which means you do and then that's why I don't want to be Internet Friends with you, silly.

pick which one you think applies and go with it.

nobody actually cares who you're friends with in real life and this goes double for The Internet but it's stupid because if you unfriend someone or unfollow them it's a public attack on their person like how dare you not acknowledge them in a networking platform, already?!

I'm not even finished going through the list, either, this blog post is just a break from the incessant clicking required to clean up the mess that is your pretend online social circle.

so if I nix ya in the next little bit, you know why. not sorry about your feels.
Tags: Rants The-internet Thoughts Uncategorized
Tweet