the windows in our old apartment are the kind with dark wooden trim and that slide up, not sideways. so last week I was cleaning the living room and noticed a huge spider living on top of one of the window panes (this part here): so I bashed at it with a magazine and thought maybe I'd killed it but it was obviously either dead or hiding in the space between the window and the wood trim because the air conditioner was in there at the time. whatever, I go on cleaning, right?

well Sunday I was on the phone with my mom and standing in the living room looking (spying) out the window and I noticed this... thing, in the drapes. at first it looks like mould (gross) but I realize that it's a fucking sack of baby spiders. OHMYGOD.

since I freak out at stuff like this I made Tyrone deal with it and... oh god... he told me that when he grabbed pulled it off the curtain it left a damp spot and it squished in his hand can you imagine if I had somehow not noticed and they had hatched???

oh god I am actually grossing myself out right now why am I sharing this?

but it gets better (worse)

last night I'm getting ready for bed and have have two comforters, a red one and a black one, and I'm looking at the black one and see this weird thing on it. so I put my face real close because I figure it's a weird fluff or something and ITS A SPIDER INCHES FROM MY FACE! naturally I scream and I realize that this horrible gargantuan thing is the spider I didn't kill the other week and it's been hiding out in the air conditioner this whole time and can you imagine if I had gotten into bed and it was there???

I swear this thing was at least the size of a quarter and Tyrone will back me up on it. I am so anxious and creeped out just thinking about this whole thing euuuuuugh.

anyway I've been trying to forget about the whole ordeal (it was on my bed, seriously, I'm freaked out) and then I see this gem on Reddit and it all comes back to me:

I'm a super-clean person I swear and this whole ordeal just has me freaked right out, I think if I have another Spider Encounter I will just loose my mind.
Tags: Apartment Scary Spiders Uncategorized
Tweet

This is Joseph Gordon-Levitt being awesome

but when isn't he, really? I've been in love with him forever.
Tags: Awesome Joseph-gordon-levitt Music Uncategorized
Tweet

and since I've been busy learning here's some learning for you, too
(because I wouldn't want you to miss out because ILU)

Tony Pierce is in Canada

which you already know.

my favourite busblogger is rocking sweet photo-essays of my home and native land, Oh Candada, and eating lots of Canuck fast food, poutine, partying in Ottawa and Quebec

and while all that's fine and dandy

or the 4.5hrs I spent on campus glued to a chair in the library working on my History of Science paper

and you know, seriously, Rogers, why has your service been so awful lately? my texts don't go through, my data cuts out constantly or is so slow there's no point in using it... maybe I should think about calling you and getting my bill adjusted because this is seriously a bunch of bovine stercus

but this isn't a post about that, either because you don't want to hear me bitch at length about the awful reception, dropped call, and data that barely works at the best of times.

or maybe it is, because I can't seem to stop typing about how annoyed I am with their service lately.

here's a cool video of some art to make up for it:

Come with me on a journey through time and space...

usually I wouldn't go blogging something from last week but I was seriously distraught when my phone decided to just freeze on me and cause all the video I'd been diligently taking all day disappear. seriously it's a lot of work trying to make videos about what is otherwise a pretty boring day going from class to class and hey maybe it's not all that interesting after all but the videos somehow showed up on my phone again (THANK YOU APPLE GODS) so here we go:

in case you forgot the reason I decided to vlog all day in the first place was because I was in a crabby mood and needed to convey it with my monotone voice and shifty eyes
(also, my stupid faces in the stills for the videos -wow)


I'm also not sure why I'm so flushed in this video?

some backstory: my History of Winnipeg class was supposed to go on a General Strike Tour which meant shuttling everyone around via carpooling and this chick from my class Eva (hi Eva!) and I were getting a ride with this dude (John?) from our class and he was making jokes about having a 'rapist van' the week prior when we'd arranged for him to pick us up from campus, so
(also I don't like riding in strange vehicles with people I don't know, classmate or not I'm just a jerk like that)


coincidentally after class she and I went to go get our rides back to campus and he had left without us (thanks guy), but luckily another very nice classmate was kind enough to give us a lift back (thanks guy!).

I was going to make some commentary to go with the rest of these but I've had a bowl of Vietnamese curry soup sitting next to me for five minutes while I work on this post and frankly I'm hungry, so enjoy:

(not sure why I lost the first half of my sentence, sry, it's vlogging-on-the-go)

maybe one day I'll edit them all together so they're a super-cute movie day collage-thing, or maybe (probably not).

The Life and Times of A Tribe Called Quest is coming to so since I'm excited about it here's some ATQC for HHS.

also miracle of miracles all that vlogging video I thought I lost the other day magically reappeared on my phone so you'll be getting some backlogged vloggin' later today.

Bring on the weekend went out to Sukothai with Komus and Shawna last night. Komus has been booked to play a bunch of shows in Australia and is gone for three weeks and we're all green with envy. I didn't finish my pad thai (though it was great, there was just a lot of it) and Tyrone had the 10 spicy and got sweat in his facial hair (gross) and afterward we came back here and made way too many snacks and drank a bunch of home-made wine.

Today is going to consist of not showering till later, playing Twilight Princess and going to this tonight:

look at her, seriously

also first five second of this video reminds me of LOTR for some reason?

I've been up since 7am today and I have done nothing. I'm in my pyjamas and fuzzy socks, drinking a coffee Tyrone brought home for me because we're out of eggs and he went to get breakfast for us. I've puttered around on The Internet and read some blogs and some news and my fingers are freezing which reminds me:

last night as I was curled right up against Tyrone to try and steal as much of his body heat in our ice-cold bed I realized that I've been crabby lately because I've been freezing, which I know I've mentioned before but I finally realized that this is the single reason I'm running around acting like this:

okay it's nearly 11am time to toss on some clothes and go for a crazy-lady run and then come home and attempt to get some schoolwork done because I have about a million things on my plate right now and like a woman school should always first. that was lame. (not) sorry.

I am not feeling well and was growing my sorrows in a bowl of Campbell's chicken noodle soup (my favourite) while trying not to get hypothermia in our icebox apartment and I took like six videos I was going to blog today and as I was transferring them into iPhoto my phone crashed and I lost them all, plus all the pictures and videos I was uploading from this weekend. I'm genuinely upset by this, I spent a lot of time taking silly videos and basically making myself cheer up throughout the length of my not-that-great day and they're lost somewhere. fml.

and don't you throw a "haha I thought iPhones never screw up" in my face because they're technology and they're not perfect and it happens but dammit that was my whole post for today and now you guys aren't getting another one because I think I have a fever or something and need to go lie down and fume and/or go to sleep.

this is how I feel right now: 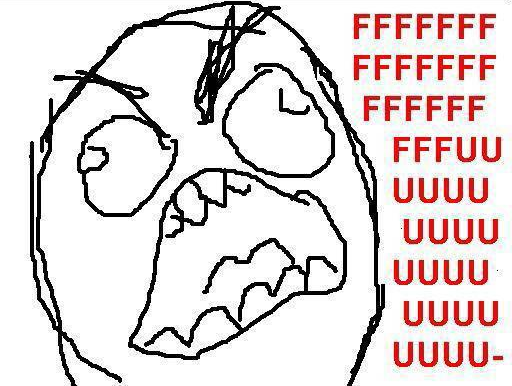 I'm going to take some Aspirin and lie down and hope things are better when I get up. gaaaaaah.
Tags: Cop-out-post-2 Uncategorized
Tweet