is a movie by Shane Carruth who is the same guy who did Primer (which is the best time travel movie ever) and is one of the most moving and challenging films I've seen recently.

It's like a dream. Half of the movie you spend watching short vignettes which originally don't seem to make sense or be related at all but eventually come together in a quietly unsettling and oddly touching story about two people who meet, fall in love, and have to deal with the consequences of being with each other.

Besides not wanting to ruin the plot for anyone who might want to see it and hasn't let me explain why I'm not going to:

To explain the plot of this movie will make it sound stupid.

It's like explaining Eternal Sunshine for the Spotless Mind to someone. It's all over the place and weird and makes sense when you're watching it but sounds awful and ridiculous when you describe it to someone else.

For instance. The scenes which depict the evolution of the relationship between the two main characters is so perfectly shot and cut together that it seems like the same conversation over and over again, which is really what most relationships are, but they convey the passage of time in a way that doesn't feel like a cheap montage conveying the passage of time.

But it's scary. As the story progresses and begins to unfold it becomes this thing more complex and questioning than just a romance, or just a speculative fiction film. It ends with more questions than when it started and watching it makes you feel there's something beneath the surface that you missed.

Which is why I liked it. Upstream Color wasn't just a blockbuster movie about love or humanity or fate, it was a work of art which pushed the boundaries of what it means to make a film that questions the world and our place in it. 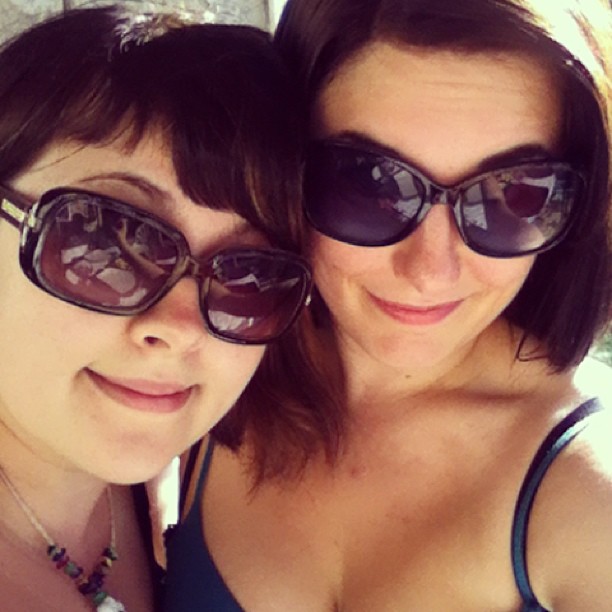 so I put on a maxi dress and made cray salad and took photos with this beaut.

We had a BBQ and lots of mixed boozy drinks at Owen & D's.

It didn't rain like it was supposed to so we sat in their backyard getting bit by mosquitoes.

which I assume is set up specifically for that purpose

or so our hosts can bone & watch TV at the same time.

I don't wanna know which.

Anyway I had the weirdest dreams which is unusual

not because I don't usually have weird dreams, which I do

but because usually when yr girl drinks there are no dreams

of weird horses and shoes and pinball machines

and greasy food when I wake up.

Which there was, come to think of it.

This band isn't even very good

but this song has been stuck in my head all day

which is weird because I haven't listened to it in years.

And it's not that I'm feeling sad

or even particularly bad

In fact today I feel great.

I get this song stuck in my head.

Which is weird I know. is how long I'm going to write for because frankly I'm in a foul as fuck mood and would rather be sulking at home with a beer instead of waiting to be picked up to go to a family function and then who knows what else all weekend. This weekend has gotten under my skin in every way possible and I need to just chill. da fuq. out.

This week has just been so trying. I feel like I've got my life on hold for some peeps and I'm getting completely jerked around and it's really wearing thin. I don't like second-guessing people and myself and what I've said/done to people and have zero tolerance for it. Nothing makes me flip out like that kind of shit but flipping out doesn't do me any good. It will just work against me. So I have to sit here and wait which also drives me nuts because I'm incredibly impatient. If there's one adult skill I've never acquired it's patience.

Anyway Tyrone is going away tomorrow night to party it up with his coworkers and in addition to getting my hurr did I have BBQ and movie plans with friends but frankly I just wanna stay home n have a soak in the bath n a glass of wine (or three) n watch a movie by myself. Is that so wrong?

The main reason is that we're supposed to be seeing the new Superman and 1. I don't wanna see it without Tyrone because he's MEGA stoked for it, 2. I hear it's only "meh" at best so I'm not really that stoked anymore, and 3. it's much easier to stay at home and relax and honestly guys I need it.

Honestly I shouldn't even be in a shitty mood at all.

I had a great, busy day at work so it went by super fast. Yesterday I got to hang with cool peeps at the a United Way luncheon and my zebra shirt was a hit. Then I biked home and took a huge-ass nap and bought a bunch of thrift-store clothes that look amazing. Tonight once I get over myself I'll get to hang with my fam, who I love, and have BBQ and home-made wine and hang out with my Granddad who is probably the coolest old dude ever.

Oh and did I mention that had free sushi for lunch?

And I got to take the cutest dog ever for a walk?

If I wasn't so busy stewing in my own mental swamp I'd be in the best mood ever!

Okay Shane. Chill the f out.

I downloaded this stupid app a few months ago which is supposed to help you meditate which sounds completely stupid and it kind of is. But honestly having some nice music playing and a hot-sounding chick voice telling me when n how long to breathe really helps. It's helping right now, actually.

Because when I get stressed out I start breathing all crazy like
in
out
in
out
really fast and my jaw clenches which I can feel right now
and this chick is telling me to let go
calm down
and stop blogging FFS.
Tags: Images Life Pink Random Stress
Tweet

Yes we are eating popcorn in bed 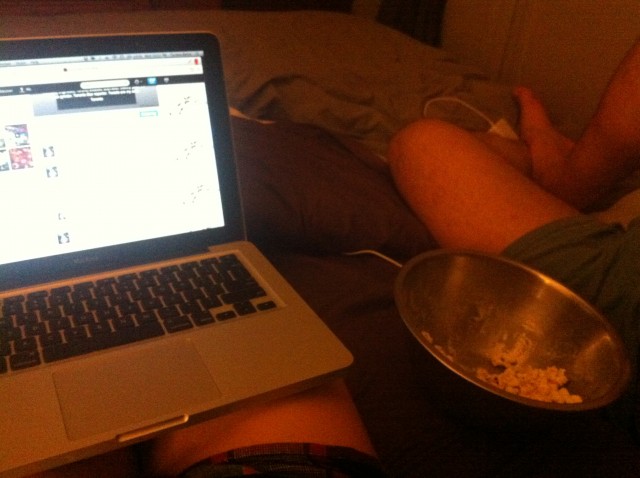 One of the great things about being an adult is getting to do what you want.

What I want at the end of most nights is to sit around in my underpants with the laptop in bed with my significant other and maybe the cats and usually tea and sometimes a snack.

Tonight for instance we are eating popcorn with sour cream n onion seasoning.

wtf put food in me you dummy

shit. I'd better get on that.

So here I am writing this drinking tea and eating popcorn with my significant other which is crazy to me because a few years ago I was dating someone who picked a fight with me over this very thing.

I've only ever really seriously cohabited with one person and pretty early on after moving in together I was reading a book having a snack in bed and he flipped out.

It's not big deal. Just some cheese n crackers and I'm holding the plate.

But he flipped the heck out and we had this big crazy fight and it boggled my mind because who doesn't have a lazy snack in their own bed once and a while?

I dreamt about you nearly every night this week Posted mostly because the presentation in this vid is pretty cool

and I really like the dude on the back right who is SUPER into it.

which surprised me for some reason

so I should have known better.

which is also used in another track that I really like: