I know you're thinking:

Alyson it's July wtf are you drinking HC for?

it's because when I moved into my new office at work there was (is) a bookshelf with a bunch of random stuff on it and our HR lady said "if you want these hot chocolate packets you can have them" which was nice I guess.

Problem is instead of the soothing 'aah' feeling I was hoping for I'm reminded of winter and skating and hidden bottles of Southern Comfort.

Which isn't what I should be thinking about in July, I know.

I should be thinking about how in a few short hours I'll be in a car blasting Cake or listening to "Let's Explore Diabetes with Owls" on our way to BC and once we get there I'll camp and listen to music and eat Fatty Arbuckle's and party with some of my favourite people on the planet and then go soak in a hot spring before coming home to normal life for a few days before another adventure.

I'm a lucky girl with exciting adventures ahead and instead all I'm doing is thinking about that time we took Adrian skating for the first time and got tipsy on ice.


Which made for a cool photo op, but really. 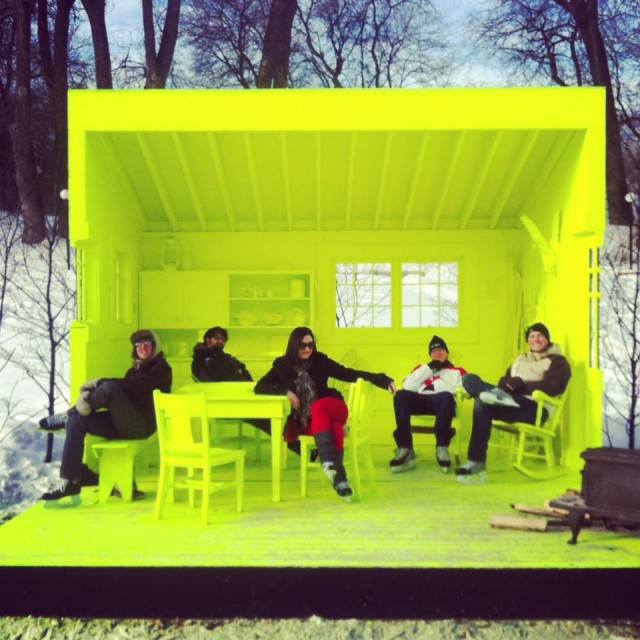 You know what, I'm just going to put this out there

Dating was the worst

Before getting "into a relationship" Tyrone I was single for a few years while I figured my shit out
(still working on that)
and even though I didn't really want to start going on dates with anyone I figured I should probably go on a few to keep myself 'in the game' and not be the weird spinster friend who hates on happy couples because they're so lonely, waah.

Sometimes they worked out for a little while and cute boys would play Monkey Island and drink beers with me or we'd watch Brazil on laserdisc and listen to vinyl.

After talking to my lady-friends I've confirmed that dates usually go like this:

to nobody except yourself which is stupid because you got yourself into this situation, dummy.

You should have just said 'no thank you' to start but instead you said yes because you're lonely or desperate or maybe both
(likely both)
and dating some idiot is better than being single, right?
(it isn't)
Which inevitably leads to that awkward situation a few dates/weeks in where you wake up and realize
you're a douchecanoe and I don't want your penis near me anymore
at which time you stop texting back and suddenly get "really busy" instead of being up-front like an adult.

(There's also that one time I slammed a guy's car door in his face and ran into my house away from him, but that's another story)

Up until now I'd always assumed that this female tactic was just called "being a bitch" or "wussing out" but today I learned a much more appropriate title:

I'm so exhausted it's hard to type 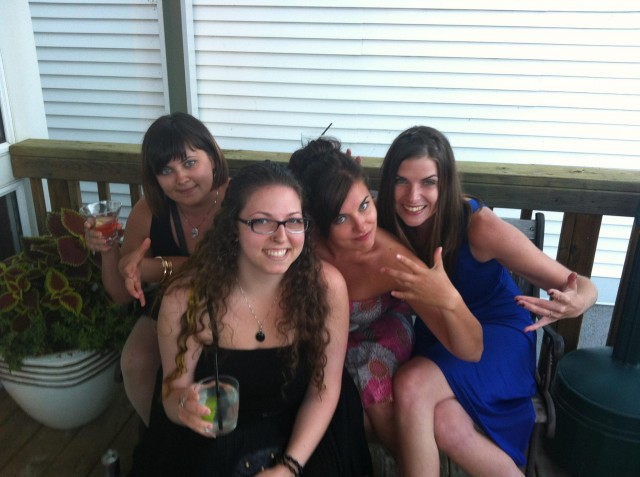 I'm lying in bed resting my poor, sore feet after spending the whole evening cleaning the apartment. When you have hardwood floors everywhere plodding back and forth from room to room dusting, sweeping, mopping and etc takes a toll and combined with the excessive partying between festivals and weddings and etc lately I'm wiped.

It's almost a shame that we're leaving to head to BC in two sleeps for Motion Notion.

I didn't grow up going camping at all and the first time I went "camping" it was just this giant outdoor multi-day mini festival and I didn't even have a tent. I was supposed to share a tent with a girl I knew and that kinda got fucked up.

That was a fucked up weekend, kinda.

But it got me camping, which has led to it being an "every other weekend" event every summer.

Anyway the day after Motion Notion ends Ty and I are going to Radium Hot Springs and we're gonna stay in a hotel with a real bed and a real shower and go for greasy food in town in addition to soaking in the hot springs before driving home.

After four days of camping in tents and only showering when I feel like coughing up $5 (!!!) for a few minutes of soapy goodness it's gonna be unreal.

I'd like to say I'll be blogging about it but who knows. I'm so behind with Folk Fest and Owen and D's wedding and all the other nonsense we've been up to this summer that I can't make any promises right now.

Because I'd never lie to you, because ILU.

Even if I don't keep in touch all that often.
Tags: Cop-out-post-3 Friends Life Parties Pink
Tweet

Throwback Thursday: Winnipeg is the best place to be from

which is something you don't hear often
not even from people from winnipeg
but it's true.

we're a big city still trying to be a small town
stuck being a small town with big-city problems
with shitty weather half the year
and a seething inferiority complex
in the middle of nowhere
(literally)
and we spend more time slamming
our sketchy mayor
our shitty transit system
and our winters
than saying good things about anything.

but our little frozen hovel
stuck out in the prairie
like a defiant 'fuck you' to common sense
breeds
amazing artists, writers, and most of all musicians
and a complex, intricate love/hate relationship
with the place we call 'home'.

this town makes you nicer
you smile and say 'hello' and make small talk in line at tim horton's
help out your neighbours or that guy
whose car got snowed in up the block
not because you want someone to reward you for doing it
but because it's the nice thing to do, dammit.

being stuck in the middle of the country
makes us much more appreciative
of what other cities have
oh you have efficient mass transit?
oh your skyline has buildings in it?
and up until a few weeks ago
oh you have an IKEA?

its size makes us all connected
everyone's had too much to drink at the king's head
gone to osborne village on canada day
seen a show at the west end
had a greasy burger at blondie's
been harassed the twoonie lady downtown
and we've all suffered from
missing a bus that came thirty seconds too early
or getting stuck outside waiting for a bus that came twenty minutes late
trying to strike a balance between two options
which are never in your favour.

living here makes you hard
we're sarcastic and cynical and critical
of everything
especially ourselves
and especially our hometown
which is why when someone else makes fun of it
they can fuck off
because that's our job
and unless you've spent your life
shovelling snow and dealing with overnight parking bans
hanging out at the toad people-watching on the weekends
driving to grand beach during the summer
and
complaining about all the things you could do if only
you were somewhere else
you haven't earned the right to bash winnipeg.

"I fucking hate this town".

** thanks to @nicolebarry204 for reminding me that this post existed -it's still true!

But since I'm too tired to blog here's 5 seasons of Breaking Bad in 9 minutes.


I've been listening to this song (my Folk Fest jam) nonstop.

I've made a million lists in the past few days.

Packed and re-packed my stuff because I'm cray.

I have all the essentials: emerald green fleece cloak for nighttime. Face paint for daytime. Beer. Snacks.

I also volunteer with a few friends which is radder than it sounds. In exchange for getting up early and walking around for a few hours for three days of the festival I get to camp, see all the shows, and eat as much amazing food as I want. I'll share the food later if I remember. It's that good that I want to brag about being able to eat it 'fo free.

Tonight after work I'm biking my fine ass home and then Ty's driving me out to Bird's Hill where I'll meet up with the handful of friends who are already there and I have a whole night/day/night to party before I have to be responsible for my volunteer shift. I'm stoked about this because last year I didn't have that extra day to hang. I mean, it was great and all, but having a day to myself will be the bee's knees.

Oh also all of these people are playing and I'm gonna see 'em (plus more):


This is why we date 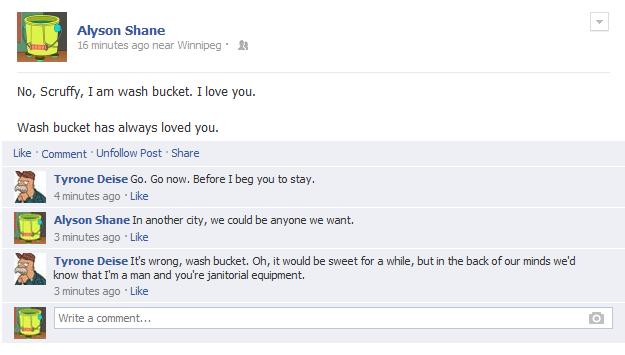 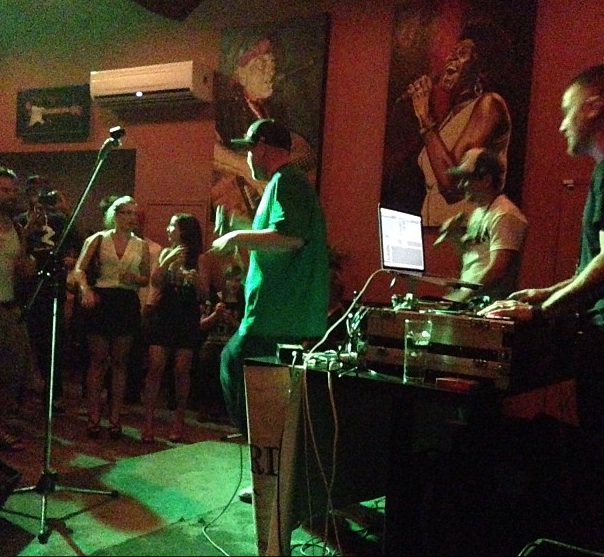 Which was amazing. Duh.

I had g&ts and a whiskey sour and some beers and sat at a high table with Colin, Nicole, John, Tyrone and Kat (who doesn't do the twitters) and had the pleasure of seeing Kendra and John who I haven't seen in ages.

I kept my eye on her all night and several times she came out of the bathroom and was wiping her mouth and nose area with both hands like she had just puked or done a boatload of drugs or something.

She was still there when we left n she was getting progressively more wasted the whole time.

Also later while I was in the bathroom this happened:

Anyway Tiffany Ponce was a great opening act (also, nice meeting you in person, finally!) and Abstract Artform killed it.

That guy is so talented it's stupid.

If you weren't there you kinda missed out. Sorry to say.
Tags: Black Concerts Friends Fun Life Music Pictures
Tweet

but only if Kat raps at the reception.
Tags: Pink
Tweet